MCX Cotton Futures traded bullish during the month of April and May month so far due to higher demand from the textile industries in the domestic market and later decline in supplies in the Gujarat & Maharashtra spot markets due to curfews and lockdown imposed strictly state wise. Although, government has allowed mills to operate but markets are closed so mills are facing cash crunch. Textile mills dealing in exports are still going strong as Indian yarn prices are attractive. By 13th May, MCX Cotton December futures price closed at Rs.22260/bale, higher by 3.24% compared to Rs.21560/bale reported on 31st March.

Fundamentally for the month ahead, we expect MCX Cotton futures to trade bearish as Cotton farmers from various states are planning to increase area under cotton cultivation in the coming 2021-22 kharif season. Indian Textile mills have reduced production due to lower domestic demand and labour shortage. Although, government has allowed mills to operate but markets are closed so mills are facing cash crunch. Textile mills dealing in exports are still going strong as Indian yarn prices are attractive. Cotton arrivals are very low due to corona virus cases and lockdown in many parts of the country. According to the Union Ministry of Textile Committee, Cotton Production and Consumption has reduced for the season 2020-21 at 303 lakh bales from 330 lakh bales earlier, owing to the current lockdown as the extreme second wave of corona virus. Although total demand is expected to be 373 lakh bales, with 303 lakh bales consumed domestically and 70 lakh bales exported, but then closed APMC markets in the northern, central and southern states of India is expected to keep the prices under pressure. Moreover, farmers in northern states such as Punjab, Haryana and Rajasthan are expected to begin sowing from next week onwards due to good irrigation facilities, while other states are expected to begin from first week of June onwards with the start of the monsoon season. As per IMD sources, monsoon is expected to be near normal around 98- 104% of normal. 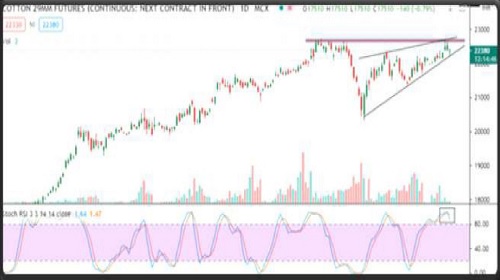 On the daily chart, MCX COTTON (JUN) future has been rising continuously in Rising Wedge formation from last couple of weeks. However, the price has faced immediate hurdle of prior supply zone which indicates a bearish reversal in the counter for the near term. In addition, Bearish Harami candlestick has also formed on a four-hourly chart, which confirms bearish trend in the near future. Moreover, an oscillator Stochastic RSI is also supportive for the short position with negative crossover. So based on above technical structure one can initiate a short position in MCX Cotton (Jun) future at CMP 22400 or a rise in the price till 22540 can be used as selling opportunity for the downside target of 20900. However, the bearish view will be negated if MCX Cotton (Jun) future close above the resistance level of 23200.

NCDEX Coriander Future price has traded bearish during the month of April owing to higher new arrivals in the domestic market. Moreover, lower demand for Coriander seed was witnessed with shutting down of the APMC markets in Madhya Pradesh, Rajasthan and Gujarat due to lockdown situation in India. Though the demand in the pharmacy sector was steady, however, local buying and exports remained sluggish in India and in the global front respectively. By 13th May, NCDEX Coriander Future price closed at Rs.6870/quintal, lower by 4.63% compared Rs.7188/quintal reported on 31st March.

Fundamentally for the month ahead, we are expecting NCDEX Coriander futures to witness bullish trend as the export demand from India is expected to be seasonally higher during the months of June and July. The APMC markets in the above states is expected to remain closed until end the May month, however, the stocks from last year has been reported to lower which is expected to support prices in the coming weeks. Coriander production for 2021-22 (marketing year) is estimated at 3.92 lakh tonnes MT (98 lakh bags) compared to last year’s 3.82 lakh tonnes (95 lakh bags, 1 bag = 40 kg). Higher production in Gujarat has compensated for the losses in Madhya Pradesh and Rajasthan by 15% and 10% respectively due to decline in area. Buyers are currently reported to be active 6900-7000 levels in the futures market with the Kota market spot price is reported to be around 6900-7000 levels as well. This clearly indicates that the domestic trend for coriander seed is expected to remain bullish for the months ahead. With unlocking of the European and United States markets, demand for Indian coriander seed is expected to remain higher during the coming months. Additionally, the Indian rupee is still reported in the lower side which makes it more attractive for the international buyers to buy Indian coriander seed over Russia and Bulgaria. 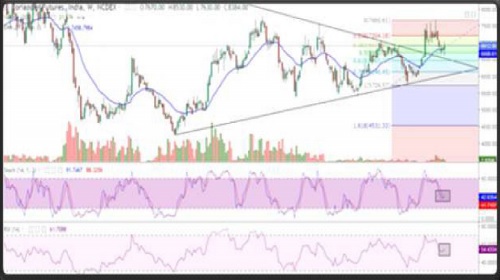 On a weekly time, frame, NCDEX Dhaniya (Jun) future had given breakout of Symmetrical Triangle pattern and again retested the upper band of the pattern with Hammer candlesticks, which indicates a bullish set-up in the counter. In addition, price has been taking support of 50% Fibonacci Retracement level & 21 Exponential Moving Averages, which confirm bullish momentum in the near future. Moreover, an oscillator Stochastic is also supportive for the long position with positive crossover. Furthermore, the RSI indicator has also sustained above 50 levels which indicates bullish strength in the near term. Hence, based on above technical structure one can initiate a long position in NCDEX Dhaniya (Jun) future at CMP 6958 or a fall in the price till 6850 levels can be used as buying opportunity for the upside target of 7900. However, the bullish view will be negated if NCDEX Dhaniya (Jun) future close below the support level of 6450.