Jeera has been finding a support at 61.8% `Retracement Level` - Choice Broking

NCDEX Jeera spot price has been gradually inclining during the month of May and in the first half of June closing at Rs.17440/quintal by 13th June. It is higher by 2.83% compared to Rs. 16961/quintal reported on 30th April 2019. Higher export demand from India as has been the key reason for incline in Unjha spot price during the coming month. Moreover, domestic buying has also been steady as Jeera crop from certain regions in Rajasthan has been reported of lower quality, based on traders’ sources. However, spot price has corrected in the last few days owing to selling pressure on the higher side. Moreover, stronger rupee with respect to dollar has also increased the export price eventually reducing the demand in the past few days. Similar to spot price, NCDEX Jeera July Futures closed at Rs.17415/quintal, higher by 1.48% compared to Rs.17160/quintal reported on 30th April.

For the month ahead, we are estimating NCDEX Jeera futures to trade bullish, as the export demand is forecasted to increase once again at lower levels which could bring the spot and future prices to new highs. Additionally, Jeera prices have also reported to be higher in Syria and Turkey which has led to shift in buying in the Indian market. Moreover, domestic market players are also estimating cumin crop production from Syria and Turkey may not be up to the mark for the current year 2019, which can also strengthen the Indian Jeera spot and future prices. Overall, we expect moderate bullish trend in NCDEX Jeera futures for the coming month.

On a weekly timeframe, NCDEX Jeera has been finding a support at 61.8% “Retracement Level”, which is a golden ratio and indicates further reversal in the prices. Moreover, price has also found the support at 50*200 EMA, which suggest that medium term trend may remain bullish. In additions, price has also taken a support at lower “Bollinger Band” formation, which intimates immediate support for near term. Furthermore, a momentum indicator RSI (14) and MACD has shown further strength with positive crossover. For short term prospect, one can initiate a long position in NCDEX Jeera (July) at CMP 17300 or fall in the prices till 17000 should be used as buying opportunity for the upside target of Rs.18000/18300 levels. However, the bullish view can be reversed if NCDEX Jeera (July) close below the support of Rs.16600. Overall, we maintain our bullish view in NCDEX Jeera (July) for the month ahead. 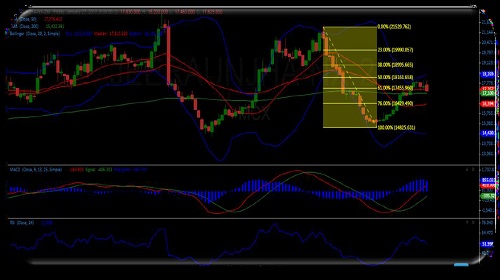