Cotton yesterday settled remain unchangeby 0% at 16370 tracking weakness in ICE cotton prices after the release of a federal report projecting higher production and inventories of both the U.S. and global crop, as consumption is forecast to sink further. In its monthly World Agriculture Supply and Demand Estimates (WASDE) report, the U.S. Department of Agriculture (USDA) raised its U.S. production estimate for the 2020/21 crop by 3% to 18.1 million bales. The U.S. ending stocks forecast has been raised 11% from the prior month. USDA also increased its 2020/21 global ending stocks estimates, which are projected 2.1 million bales higher than the previous month and 4.4 million bales more than in 2019/20. World production is seen 1.3 million bales higher and consumption is forecast 1.2 million bales lower at 113.05 million bales, USDA said. China's agriculture ministry lowered cotton imports in the 2019/20 year due to weak demand for Beijing's textile exports. Worldwide restrictions to contain the coronavirus pandemic hit non-essential apparel demand and has weighed on cotton prices. Markets now await weekend talks between the United States and China in which the two nations are expected to review their Phase 1 trade deal. Technically market is under long liquidation as market has witnessed drop in open interest by -2.57% to settled at 2011 while prices remain unchanged 0 rupees, now Cotton is getting support at 16320 and below same could see a test of 16280 levels, and resistance is now likely to be seen at 16390, a move above could see prices testing 16420.

Trading Idea for the day

The U.S. ending stocks forecast has been raised 11% from the prior month. 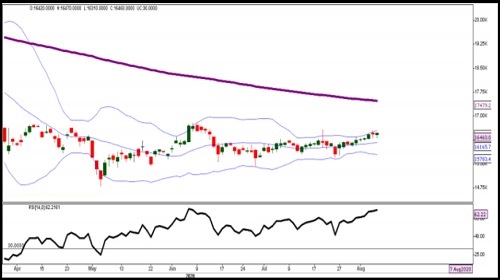 Cocudakl yesterday settled down by -0.42% at 1899 on profit booking after prices gained as support seen after CCI officials said they have purchased more than 11 lakh bales (each containing 170 kg of lint) or 55 lakh quintals of kapas (raw, unginned seed cotton) in the 2019-20 season, the highest procurement from Gujarat since 2008. “We are withdrawing from the market now. We are already a few weeks into the monsoon and rain is affecting purchasing operations,” said a senior official, adding that the CCI procured around one lakh bales in June. Though the peak cotton marketing season, which begins in Gujarat in October and runs through June is over, APMCs are still recording significant arrivals of the natural fibre on their yards. More procurement centres, gin and press units helped Maharashtra clock a five-year high in terms of government procurement of cotton. With over 92 per cent payment cleared for farmers, the government is confident of finishing the process in the next one or two days. Maharashtra reported an all-time high 44 lakh hectares of cotton acreage and production of 407 lakh quintals (80 lakh bales each of 170 kg) of cotton. Since the start of the season, the fibre crop has been trading well below its government declared minimum support price (MSP) of Rs 5,500 per quintal. Technically market is under fresh selling as market has witnessed gain in open interest by 2.85% to settled at 38970 while prices down -8 rupees, now Cocudakl is getting support at 1880 and below same could see a test of 1862 levels, and resistance is now likely to be seen at 1924, a move above could see prices testing 1950.

Trading Idea for the day

Cocudakl dropped on profit booking after prices gained as support seen after CCI officials said they have purchased more than 11 lakh bales in the 2019-20 season.

Maharashtra govt ends up procuring 50% of cotton in Maharashtra. 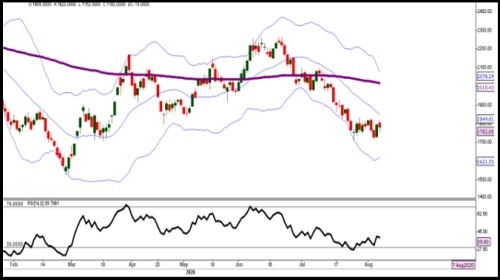