With the surge in COMEX Silver Futures and MCX Silver Futures in the past couple of weeks, there is a clear indication of prevailing supply tightness in the global markets. Outbreak of covid-19 cases in Mexico and other Latin American countries has earlier disrupted the mining activities in the past couple of months and the production is still being affected in the current month August due to further surge in covid-19 cases in the same countries. Conversely, easing worries in other parts of the world regarding covid-19 cases, with many countries having to ease their lockdown situation; led to resuming of the industrial and manufacturing activates. China and other Asian Countries have already resumed its industrial activates to a certain extend after the covid-19 cases have begun to stabilize, but, worries continue to prevail as covid-19 cases continue to soar once again.

Looking ahead, MCX silver prices to trade further bullish in the coming months as festive buying for silver ornaments and jewellery is expected to pick up along with Gold; especially during the time of Navratri and Diwali festivals. Diwali festival (by Mid-November 2020) is the time when the MCX silver prices is likely to peak for this year before it makes a next fall or correction. Currently, physical buyers and jewellers in India are awaiting some corrections in the spot and future prices in the near future; before they begin with their high degree buying of gold and silver; for the upcoming festive season starting from the end of third week of August onwards. Similarly, ETF investments has shown further incline in the global markets after the massive capital inflows in the international markets after the declaration of various stimulus packages by the developing and developed countries. Moreover, silver prices to also find support as the Dollar index is trading at the lower levels which has also invited higher buying of Silver and other base metals by the global buyers. The dependency of the US Dollar has declined due to hopes of revival in the developing economies over the developed economies leading to shift in investments from the developed economies to the developing economies. Sterling Pound and Euro Currency have also gained in the past few months after the continued selling of the dollar currency in their domestic markets. The Gold silver ratio which had traded at the highest levels of 125-126 levels on 18" March, has gradually declined in the past couple of months and is currently trading at 72-74 levels. In this coming months, we can expect that the ratio can further come down to 60-62 levels which would indicates further demand for silver (being cheaper) as compared to gold. In the case of India, Central Government has taken various initiatives to revive the Indian economy from its lockdown scenario, by boosting industrial activities in construction and infrastructure developments. Central Government of India is also focusing on making India more self - reliant in order to boost more domestic production of raw materials and finished goods, and rely less on finished products from the international producers. Make in India policy with various stimulus packages for various sectors by Central Government of India is expected to boost industrial production and become more self reliant. However, ongoing global worries of uncertain longer recession in the some of developed countries like U.S., UK, Japan, Germany and European Union could also cap extreme bullishness in global and domestic silver prices. But then, the Indian equity market has shown good amount of recoveries in the month of July and August month so far, signaling that the economy is getting back to the normal levels. International experts forecasts global economy to return back to the pre-covid-19 situation by Oct-Dec months of 2020, raising hopes for more positivity. U.S. Elections by the end of this year 2020 could also play a key role in determining the movement of the global bullion prices. Possible delays in U.S. Elections based on recent U.S. sources, could also support gold and silver prices on the longer duration.

In conclusion, we are estimating bullish trend in the MCX Silver Futures and prices are likely to move towards Rs. 100,000 levels in coming two-three months.

Note: The above fundamental outlook on MCX Silver Futures is based on recent developments in the domestic and global markets. The said outlook may vary, incase of extreme change in domestic, global or geopolitical factors in the international makers.

On the daily timeframe, MCX Silver December future had shown good upside movement from the level of Rs.50949 to Rs.79723, made a new high since April 2011, after that we have seen further correction from the higher levels and price has taken another support at Rs.63325, which was the 61.8% “Retracement Level” of its priortrend. Moreover, on the another chart it is forming Flag Pattern, which is a bullish in nature and indicating the breakout above Rs.74145 levels, which may drive the prices towards new high. 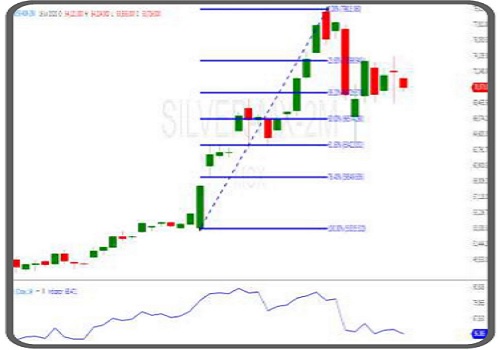 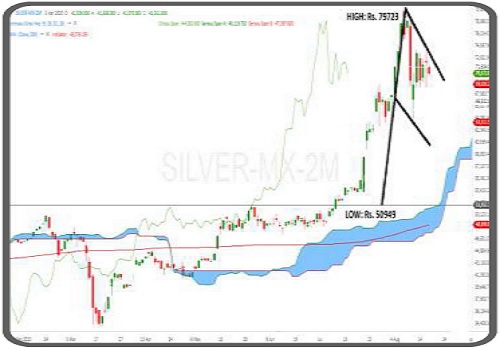 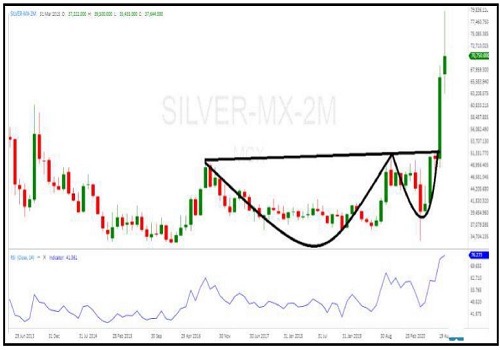 Correspondingly, on the monthly chart MCX Silver (Dec) has broken out from its “Cup & Handle Formation” which confirms bullish presence in the counter. Also, 20*50 “Simple Moving Averages” have shown a positive crossover which indicates control in the hands of the bulls. Furthermore, Silver has sustained above its “Ichimoku Cloud” which suggests an upward bias in the counter. Additionally, momentum indicator RSI (14) has sustained above its 50 level which signals rising strength. Moreover, Stochastic (6) has shown a positive crosser which confrim positive momentum.

Based on the above technical structure, we can expect a bullish move in MCX Silver (Dec) for the month ahead. On the higher end, the price may find resistance around 79723 levels, a break from these levels can strengthen the prices to rise higher towards 99000 levels, while on the lower end; it may test the support at 58500 levels. 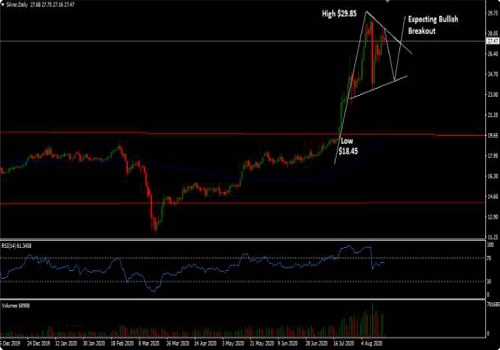 On the daily timeframe, MCX Silver December future had shown good upside movement from the level of Rs.50949 to Rs.79723, made a new high since April 2011, after that we have seen further correction from the higher levels and price has taken another support at Rs.63325, which was the 61.8% “Retracement Level” of its priortrend. Moreover, on the another chart it is forming Flag Pattern, which is a bullish in nature and indicating the breakout above Rs.74145 levels, which may drive the prices towards new high. 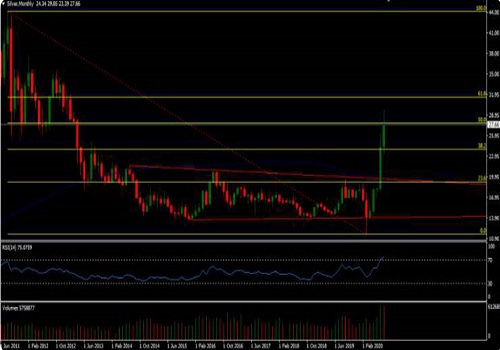 On the monthly timeframe, COMEX Silver has formed decisive bullish candles and broken out from its “Downward Sloping Channel”. This rally has been confirmed with rising volume which indicates strength in the counter. Additionally, price has closed above its 100 Days “Simple Moving Average” which will act as a vital support in the near term. Moreover, Silver has been trading near its 50% “Fibonacci Retracement Level”. A break from these levels will push the prices even higher. Also, momentum indicator RSI (14) has breached above its 70 levels which will boost the up move further. Based on the above technical structure in Daily & Monthly chart, we are expecting a bullish move in COMEX Silver for the month ahead. On the higher end, the price may find resistance around $29.85 levels, a break from these levels can strengthen the prices to raise higher towards $38.40, while on the lower end; it may test the support at 18.45 levels.

IOC Board to mull raising up to Rs 20K Cr via bonds, debentures

Djokovic not to play at Paris Masters