* Jeera July futures on NCDEX continue to move in thin ranges. On Monday, it ended tad up supported by fall in arrival in the spot market. However, subdued domestic and export demand weighed on keeping gains under check.

* Coriander July futures on NCDEX ended tad up on Monday following an initial fall. Fall in arrivals in the spot market along with firm demand lend support.

* Short-covering was witnessed in NCDEX July Turmeric futures on Monday after hitting a two week low. The yellow spice is under pressure from tepid demand both domestic and overseas.

* Cardamom July futures on MCX was not traded on Monday

* The average price of small cardamom at e-auctions held at Bodinayakanur, Tamil Nadu on Monday was Rs. 1586.85 according to the data from the Spices Board. 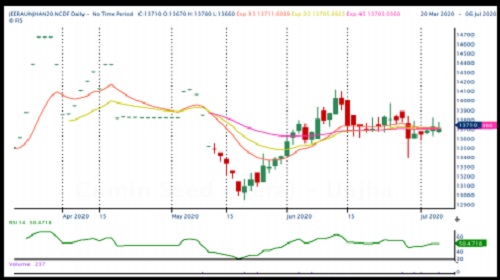 * NCDEX July Soybean futures fell on higher acreage is likely to end with record output during this season. July Mustard seed traded higher due to firm demand from oil millers in the domestic market.

* India's soymeal exports fell around 58.7% on year to 50,000 tn in May, data from The Soybean Processors' Association of India showed.

* India's edible oil imports fell around 40% on year to 707,478 tn in May, lowest since 2011,The Solvent Extractors' Association of India said in a release. During Nov-May, edible oil imports were at 6.89 mln tn, lower than 8.38 mln tn imported a year ago. Imports of refined, bleach and deodorized palmolein fell 96% on year to 16,250 tn in May, because it was kept under restricted category by the Centre.

* The US Department of Agriculture has pegged global oilseed production in 2020-21 at 605.9 mln tn, compared with its estimate of 575.2 mln tn for 2019-20, primarily due to higher soybean production in its report for May. The report has pegged global soybean output 26.6 mln tn higher on year at 362.8 mln tn. For Brazil, soybean output is seen rising by 7.0 mln tn to 131.0 mln tn. Production of the oilseed in the US, is also seen rising by 15.5 mln tn to 112.3 mln tn. In Argentina, another key grower, soybean output is expected to be 2.5 mln tn higher at 53.5 mln tn. Global production of high-oil content seeds is projected up 3% from 2019-20 on increased canola production for Canada, Australia, and Ukraine, and higher sunflower seed production for Argentina and Ukraine. Partly offsetting is lower sunflower seed production for Turkey. Demand for protein meal from China is also seen higher on year in 2020-21. Global protein meal consumption outside of China is projected to increase 2% in 2020- 21, down from the prior five-year average of 3% due to the slowing global economy. Given the higher demand for protein meal, global soybean exports are expected to increase by 8.0 mln tn to 161.9 mln tn during the period. Of these stocks, China is seen buying the largest share at 96.0 mln tn.

* Malaysia has decided to exempt palm oil and its derivatives completely from export duty during Jul-Dec as part of plans to support industries hit by the COVID-19 pandemic, local media reports. 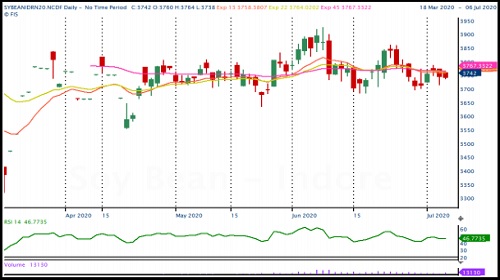 * The Cotton Corp of India has lowered its reserve sale price of the fibre by 300 rupees a candy (1 candy = 355 kg) following a decline in spot prices. This is the second time that the agency, which has procured a huge stock of cotton this year, has undertaken a price cut this month. 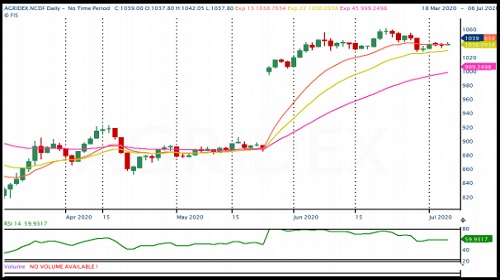 * According to the data released by Rajasthan's Agriculture Department, as of June 26, guar has been sown under 203200 hectares compared to 159400 hectares during the same period last year.

* ICEX July rubber futures ended down on Monday, shedding nearly one per cent on tepid demand. However, concerns over supply lend support. 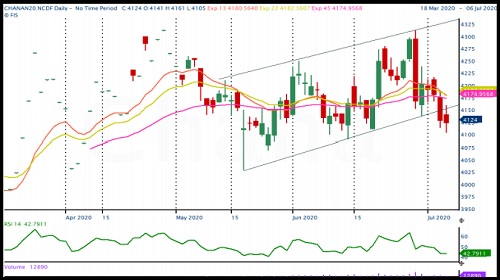