* Rising more than two per cent, Jeera futures on NCDEX climbed to more than five week high on Tuesday on concerns over supply. The key spot market of Unjha in Gujarat is shut till April 3 due to complete lock down in the state to contain the spread of coronavirus pandemic. However, the broad underlying trend stayed weak on expectation of good production in the 2019-20 rabi season.

* According to the Spices Board, jeera exports rose 27 per cent during Apr-Dec 2019 to 167000 compared to same period last year.

* Coriander April futures on NCDEX stretched gains by more than 1.5 per cent on Tuesday. With the key spot market in the major coriander producing state of Rajasthan shut, there were concerns of supply.

*  Zigzag moves were witnessed in NCDEX turmeric April futures and ended about 1.5 per cent on Tuesday on worries over supply owing to lock down. However, expectation of higher crop in 2019-20 kharif season may weigh on.

* Cardamom MCX April futures continued its downtrend on worries over both local and export demand. Auctions being affected due to spread of coronavirus weighed on the sentiments as well.

* According to the data from the Spices Board, Indian exported 1405 tonnes of cardamom for Apr-Dec 2019 period, down 35 per cent compared to same period last year.

* Spices Board of India has resumed daily electronic auction of cardamom at its centres in Puttady district of Kerala. On Monday, the electronic auction had been suspended in Puttady and Bodinayakanur, Tamil Nadu until Mar 31 to contain the spread of coronavirus, the board said in a circular. The auction centre in Bodinayakanur will remain closed till further notice, it said. The board has taken the decision following permission from Kerala government, which has told auctioneers to provide masks to bidders and staff engaged in the auction. A maximum of 30 bidders will be allowed at the auction at a time, according to the circular. 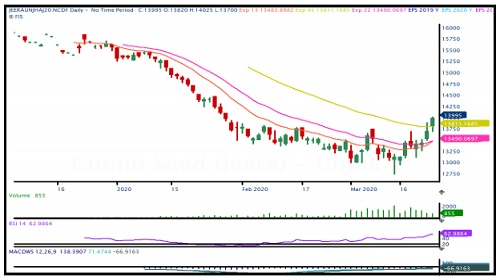 * Except Soy oil, all other commodities in the edible oil complex rose on concern over decline in supply as most of the states are undergoing lockdown on fears over spread of corona virus across different states.

* NCDEX Apr Soybean futures traded higher fall in supply in the spot markets as most of the mandis were closed. Apr Mustard seed futures prices settled higher as most of the markets were shut on imposition of crackdown across Rajasthan.  The Solvent Extractors' Association of India has estimated mustard output in India in 2019-20 (Jul-Jun) at 7.8 mln tn, up 3.7% from the previous year, primarily due to supportive weather conditions, it said in a report.

* In January, soymeal exports slumped to 6,107 tn from 86,378 a year ago, according to data released by The Solvent Extractors' Association of India. In January, mustard meal exports also declined to 35,664 tn from 57,995 tn a year ago.

* In its 2nd advance estimate, The government has raised it soybean output estimate for 2019-20 to 13.6 mln tn against 13.5 mln tn pegged earlier. DGFT notified that import of RBD Palmolein and Palm oil under “restricted list” to regulate excessive import to India. In the meantime, Kolkata has issued licences for 88,000 tons f import of RBD Palmoilein from Nepal at Zero duty ynder SAFTA agreement.

* China's soybean imports is likely to increase by 3.0 mln tn to 88.0 mln tn, which reflects higher crushing of soybean in the country. The agency has pegged the US's soybean exports this year at 49.7 mln tn, up from 48.3 mln pegged earlier. For Brazil, exports during the year are seen at 77.0 mln tn, 1.0 mln tn higher than the previous estimate.

* India's castor oil exports fell 6% on year to 38,199 tn in January, according to Solvent Extractors' Association of Indi

* Malaysia's palm oil output in February rose 10% on month to 1.3 mln tn, according to the Malaysian Palm Oil Board data. Inventory of total palm oil in the country fell 4.2% to 1.7 mln tn in February. Stocks of processed palm oil in the country was at 838,634 tn in February against 910,484 tn a month ago, while that of crude palm oil were at 842,965 tn compared with 844,930 tn in January. According to the Malaysia Palm Oil Board, palm oil exports in February was largely unchanged at 1.1 mln tn while bio-diesel exports fell nearly 63% to 21,790 tn.

* Exports of palm oil and its derivatives during Mar 1-20 were 20% lower on month at 654,440 tn, private cargo surveyor AmSpec Agri Malaysia said. 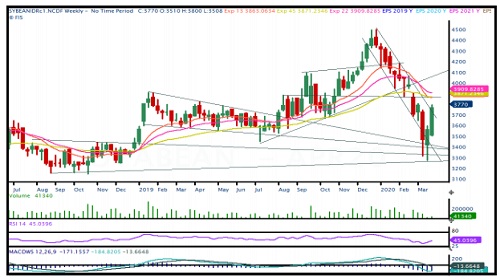 * Deals to export around 150,000 bales of cotton mainly to Bangladesh and a few to China have been put on hold due to disruption in business and transport services because of the spread of coronavirus, said traders. "Slowdown in banking activity and closure of ports and borders has affected the entire business. These export consignments of 150,000 bales (1 bale = 170 kg) might get cancelled if everything does not come back to normalcy soon," said Dharmendra Jain, director of Ahmedabadbased DP Cotton.

* The cotton output in Punjab is seen surging 51% on year in the current season to 1.85 mln bales (1 bale = 170 kg) due to higher acreage and yield. Punjab is a key producer of wheat and cotton.

* The Cotton Association of India has maintained its estimate for production in the country in the 2019-20 (Oct-Sep) season at 35.45 mln bales (1 bale = 170 kg), up 13.6% from the last season. Considering the opening stock of 3.2 mln bales, the cotton body expects the total supply to be around 41.15 mln bales in the current season. The cotton body retained its estimate of 4.2 mln bales for exports and pegged imports at 2.5 mln bales. Domestic consumption is expected to be 33.1 mln bales, unchanged from the previous month's estimate. Closing stock of cotton for the 2019-20 season is now pegged at 3.85 mln bales.

* The US Department of Agriculture's Foreign Agricultural Service has maintained its estimate for India's 2019-20 (Aug-Jul) cotton production at 37.6 mln bales (1 bale = 170 kg). It has revised upward its import estimate to 2.8 mln bales from 2.6 mln bales in January. It has increased the import estimate on expectation of a rise in shipments from the US and Brazil. Opening stock of cotton in India is estimated at 11.7 mln bales, while consumption by mills is seen steady at 31.5 mln. India's export estimate is also seen steady at 5.1 mln bales. For 2019-20, the agency has revised upward its estimate for closing stocks to 15.4 mln bales from 15.1 mln bales projected in January.

* The International Cotton Advisory Committee expects global prices of cotton to rise due to lower ending stock in 2019-20 (Aug-Jul), the committee said in its report for December. The agency forecast global cotton ending stocks to decline to 18.0 mln tn from 18.27 mln tn estimated the previous month. Global cotton production is seen steady at 25.92 mln tn in the ongoing season, while global supply of cotton in 2019-20 is projected at 44.19 mln tn. It has maintained its estimate for global cotton consumption at 26.2 mln tn. Global exports of cotton are at 9.41 mln tn.

* Procurement by state-owned Cotton Corp of India in the current marketing year that began on Oct 1 has exceeded 5.8 mln bales (1 bale = 170 kg). India is likely to harvest 36.0 mln bales, of which around 55% has already arrived in the market, and CCI has bought nearly 28%. According to CCI, it aims to procure 6.5-7.0 mln bales of the crop in the current year, though this would depend on the price and the quality, this being the fag end of the harvest season, which is over sixfold higher than 1.1 mln bales procured the previous year. 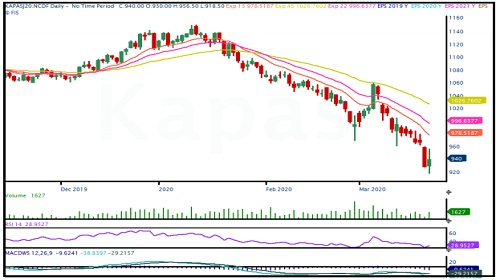 * Profit booking was witnessed in Chana April futures on NCDEX on Tuesday after hitting a two month high.

* The National Agricultural Cooperative Marketing Federation of India has procured 21,208 tn of chana from farmers in Andhra Pradesh and Karnataka as of Tuesday, an official with the agency said.

* The National Agricultural Cooperative Marketing Federation of India has stocks of 1.6 mln tn of chana, which the agency bought under the price support scheme in the 2019- 20 (Apr-Mar) rabi season.

* Short-covering moves were witnessed in guarseed and guargum futures on NCDEX on Tuesday following an initial fall.

* As per the Agricultural and Processed Food Products Export Development Authority, India shipped 19% lower guar derivatives products to 267823.67 MTs in the first eight month of this financial year against 330974.88 MTs in 2018-19 during the corresponding period of time.

* Following an initial fall, ICEX rubber futures ended more than one per cent up on Tuesday. A bounce back witnessed in TOCOM rubber futures after hitting 4-year low and gains in crude oil prices lend support. However, lack of cues from the spot market owing to lock-down in Kerala affected the sentiments. 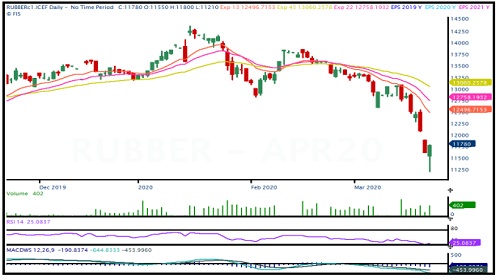 May series ends with a bang by Mr. Sameet Chavan, Angel Broking