* Bullishness prevailed in Cardamom as worries over output intensified. On MCX, the most active July futures jumped four per cent on Monday. Delay expected in com-mencement of harvest in the upcoming season fanned the uptrend amidst tight supply.

* Jeera July futures on NCDEX took a breather following two consecutive days of de-cline. Decline in arrivals in the spot market of Unjha amidst firm demand lend support. According to trade sources, arrivals in Unjha were pegged at 6,000-7,000 bags (1 bag = 55 kg), down from 8,000-9,000 bags on Saturday.

* Zigzag moves were witnessed in coriander July futures on NCDEX on Monday. Following an initial rise to one week high, the commodity came under profit booking and ended marginally down.

* Warehouse stocks at the exchange rose to 7,258 tn on Wednesday from 7,079 tn a week ago, exchange data showed.

* Arrivals of coriander in spot market of Kota, Rajasthan, during Jun 1-11, were around 591.5 tn, down 40% from the year-ago period, according to agmarknet.gov.in.

* Most active July Soybean shed previous day’s gains as the skymet weather forecaster announced that monsoon is likely to revive from Friday onwards. Farmers in the country have sown soybean across 37,000 ha as of Thursday, over half of what was planted during same period last year, as per data from the farm ministry.

* Mustard futures July futures on NCDEX fell yesterday on back of poor export demand for meal. Mustard meal exports from the country fell 85% on year to 19,519 tn in May, as per data released by The Solvent Extractors' Association of India.

* Soymeal exports in May were at 18,470 tn, sharply lower than 76,026 tn a year ago, as per data released by The Solvent Extractors' Association of India.

* As per SEA latest report, India’s castor oil exports plunged 30.5 per cent year-on-year to 36,669 tonnes in October, Slowdown in demand from China, which accounts for around 70 per cent of India’s non-edible oil exports, dragged overall exports lower. Castor oil exports were 3 per cent lower month-on-month, the data showed. The outlook for exports is bearish as demand in the global market is unlikely to gather pace in the coming months.

* USDA expects India’s oilseeds production higher by 8% in 2019/20 in expectation of normal weather condi-tion. Higher oilseeds supply may increase oilseeds meal production by 5.5% to 18 million tones. It projects oil meals exports at 3.2 million tonne with an increase of 10% in normal market condition and competitive pricing.

* Malaysia's palm oil exports were up 2% on month at 1.65 million metric tons in April, the Malaysian Palm Oil Board said. Whereas, Malaysia's End-April Palm Oil Stocks 2.73M Tons; Down 6.6% .

* Inventories of processed palm oil in Malaysia fell 13.4% on month to 984,075 mln tn in the reporting month, while crude palm oil stock was at 1.46 mln tn, down 8.2%, according to Malaysia Palm Oil Board data.

* The government on Monday started procurement of sunflower seed, harvested in the 2018-19 (Jul-Jun) rabi season in Haryana, under the price support scheme. Under the scheme, the agency procures the crop if market prices fall below the minimum support price. The government's nodal agency NAFED started procur-ing the crop in Ambala, Shahabad, and Panchkula districts in Haryana. It bought 103 tn of sunflower (seed) on June 3. 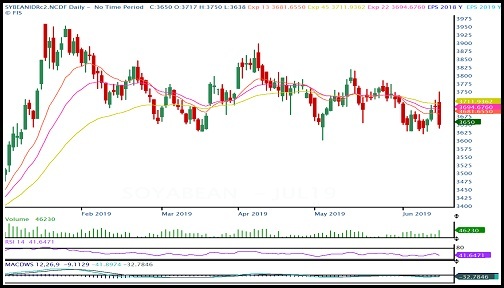 * High velocity wind and hailstorm which lashed the cotton crop in Bathinda and Mansa districts of Punjab. The cotton plants got damaged in over a dozen villages in in both the cotton-producing districts due to hailstorm in in Budhlada, Talwandi Sabo, Maur and Sangat areas.

* In Punjab, cotton crop has been sown in nearly 4 lakh hectares and may go up by 10,000 hectares as the sowing is still going on, according to the State Agriculture department. The acreage was nearly 2.84 lakh hectares in 2018. In Haryana, farmers had sown cotton in 6.35 lakh hectares till June 6. Last year the total area under cotton was 6.61 lakh hectares.

* The Chinese government has sold around 224,000 tn of cotton from its state reserves during May 5-Jun 6 against 262,800 tn offered at the auction. This year, the daily sale quota has been set around 10,000 tn compared with the previous two years' 30,000 tn because the total stock fell to 2.5 mln tn ahead of the auctions, compared with 7.0 mln tn a few years ago. In 2018, the country had sold around 2.5 mln tn cotton from its reserves. The Asian giant has been drawing down its massive cotton reserves built over the past three years.

* India's 2018/19 cotton imports are likely to double from a year ago to a record 3.1 million bales as the drop in production to the lowest level in nine years. The cotton crop estimate for the season is reduced by 600,000 bales to 31.5 million bales.

* China is going to commence the state cotton reserve’s auction from May 5 and end on Sep 30.The reserve will offer 10,000 metric tons (about 45,000 bales) each session. The market seems to be affected bearish as it will impact global trade. Qualities are expected to be low grades, which will help sustain demand since the low-grade market within China is reportedly very tight.

* Indian importers have booked nearly 19 lakh bales while export is just at 40 lakh bales. Net Outflow of cotton is near 20 lakh bales against last year’s above 50 lakh bales. 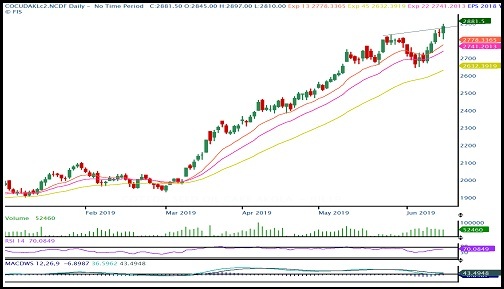 * Chickpea area is expected to fall in Canada from 176 to 133 thousand Ha in 2019-20 while production is expected to fall from 3.11to 2.30 lakh MT. Supply is forecast to increase due to higher carry-in stocks, but softened by lower imports and production. The average price is forecast to fall due to larger world supply, with the expectation of an average grade distribution in 2019-20 as per Canada Stats. US chickpea area for 2019-20 is forecast by the USDA to decrease by 40% to 0.52 million acres from the previous year. This is largely due to an expected fall in area in Idaho, North Dakota and Washington. Assuming normal yields . Production is likely to decline by 43% to 0.33 MT in 2019-20.The major market for Us is EU, Pakistan and Canada

* The National Agricultural Cooperative Marketing Federation of India has procured 749,088 tn chana under the price support scheme in eight states as of Monday, an offi-cial with the agency said.

* According to data released by farm ministry, acreage of pulses was sharply down at 67,000 ha, compared with 134,000 ha a year ago. The decline in area under pulses could be due to weak pre-monsoon rains.

* Chana procurement in six key growing states is gaining pace as imports of yellow peas is seen higher this year following the government's plan to relax quantitative re-striction on imports of the latter. National Agricultural Cooperative Marketing Federa-tion of India, the Centre-run nodal agency, has procured 187,000 tn chana, an official said. This figure is 65% higher on week as of Thursday.

* As per preliminary sentiments from market sources, acreage of guar is likely to de-crease and farmers are likely to shift to other remunerative crops such as cotton and pulses. Increase in crude oil prices are not supporting gum prices as North American importers are using slick water for hydraulic fracturing. 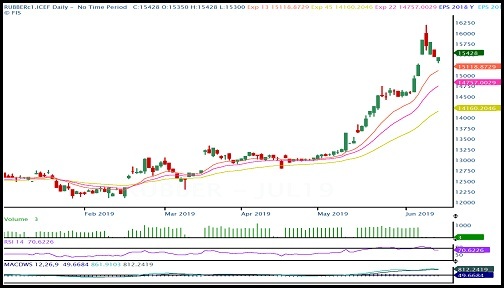 The rupee depreciated further and moved to 75.40 levels - ICICI Direct