* Jeera stretched losses on Monday. The most active October futures on NCDEX hit its weakest level since mid-April this year on concerns over quality amidst expectations of good crop in upcoming season.

* Dhaniya October futures on NCDEX on Monday gained more than one per cent on Mon-day as continuous rains in one of the major trading center in Rajasthan affected sup-ply.

* Higher crop expectation in the current 2019-20 kharif season maintained downwards pressure on turmeric. The October futures on NCDEX fell more than 2.5 per cent on Monday, hitting its lowest level since March-end this year.

* As per Andhra Pradesh Govt, Turmeric sowing as on 04th September 2019 reported 9,722 hectares (from normal area) as compared to 16,867 hectares in the correspond-ing period last year.

* As per Telangana Govt, Turmeric sowing as on 04th September 2019 reported 48,315 hectares as compared to 47,790 hectares in the corresponding period last year. 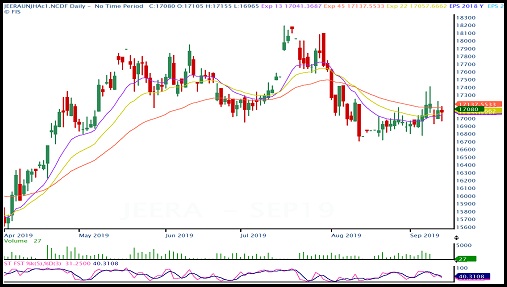 * All the components in the edible oil complex rallied yesterday.

* Oct. RMseed prices on NCDEX traded higher on back of improved demand for oil from millers. However, major upside was limited due to expectation of rise in mustard seed acreage in upcoming sowing season.

* Mills in India crushed 575,000 tn of mustard seed in August, up by 15% higher compared to previous month, ac-cording to Mustard Oil Producers Association of India. Higher crushing is due to improved export demand from South Korea.

* Malaysia's palm oil exports during the Sept. 1-10 period are estimated to have fallen 23.2% on month at 393,129 metric tons, cargo surveyor AmSpec Agri Malaysia.

* In July, imports of crude palm oil rose 47% on year to 532,784 tn, according to the Solvent Extractors' Association of India. 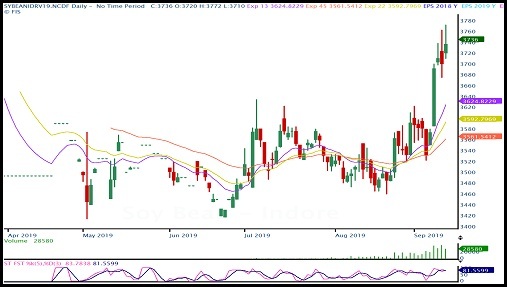 * The area under cotton in the country was at 12.66 mln ha as of last week, up 5% on year. The acreage has surpassed the normal sowing area of 11.6 mln ha for the period.

* The US Department of Agriculture has scaled down its estimate for average global cotton price in 2019-20 (Aug-Jul) for the fourth consecutive month due to lower demand from major consuming countries, which would lead to a rise in ending stocks for the year. For 2019-20, global cotton production is now seen at 124.9 mln bales (1 US bale = 218 kg), against the forecast of 125.6 mln bales in August, as crop in the US and Australia is expected to be slightly smaller.Globally, con-sumption is now estimated to decline to 121.7 mln bales, against the previous forecast of 123.1 mln bales, leading to rise in global ending stock at 83.8 mln bales, compared with 82.5 mln bales esti-mated a month ago.

* The report also forecast that overall cotton imports to Vietnam may dip further in August. The US Department of Agriculture has further cut its forecast for average global cotton prices in 2019-20 (Aug-Jul) by 3 cents from previous month to 60 cents per pound noting lower demand from major consuming countries, which may lead to increase in ending stocks for the year.

* UK-based Cotton Outlook has maintained its estimate for India's 2019-20 (Aug-Jul) production at 6.13 mln tn, which would be 7% higher on year, and has downward revised its projection for the global crop falling by 51,000 tn to 26.68 mln tn, due to a fall in production in Brazil and Uzbeki-stan. However, the production estimate is seen higher by 52,000 tn to 4.9 mln tn in the US. The agency has also lowered its 2019-20 global cotton consumption view to 25.7 mln tn from 25.9 mln tn seen in the previous month. 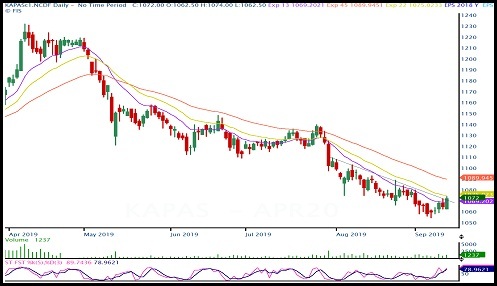 * Nafed has started offering chana in Maharashtra, U.P. & M.P. It has offered 5400 MT in Mah,1831.47 MT in U.P. &20815.96 MT in M.P. It has passed tender for 420 MT in Khandwa at Rs 3981.In other states like Rajasthan, Gujarat & MH, bids were not passed due to lower price. As market is already reeling under pressure, acceptance of lower bid may pressurize cash market further. Buyers are unwilling to buy in bulk quantity as sentiments turned weak.

* NCDEX, with the approval from SEBI, has modified the name of guar gum contracts to guar gum refined spills effective from Sep 3, 2019, according to a circular on the ex-change's website.

* According to latest update, area sown under Guar in Gujarat until 26th August 2019 is 123922 hectares compared to 106222 hectares in the previous Kharif season. The last three year average normal area for guar seed in Gujarat is 186650 hectares. 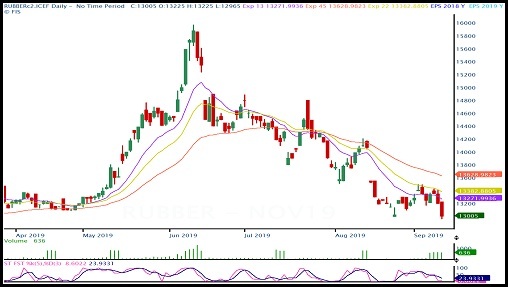 Cotton prices on the weekly chart are trading within a range since March 2020, Fibo level of 17000 acts as important resistance - Kedia Advisory