* Following an initial rise, Jeera NCDEX June futures ended about per cent down on Thursday. Amidst concerns over supply due to the ongoing nationwide lockdown, tepid demand and forecast of higher production weighed on.

* According to the Spices Board, jeera exports rose 27 per cent during Apr-Dec 2019 to 167000 compared to same period last year.

* Coriander June futures on NCDEX ended down on Thursday following an initial rise. Forecast of higher output and demand worries weighed on even as there prevailed worries over supply due to the ongoing traders strike in Rajasthan.

* Rajasthan Khadya Padarth Vyapar Sangh, the apex association of traders in Rajasthan has decided to keep all farm trade, including mills, shut till Friday to oppose the state government's decision to impose 2% farmers welfare fee on trade of farm produce, Babulal Gupta, the association's chairman, said.

* Govt. pegs 2019-20 coriander output at 762000 tonnes. While, production is seen rising in 2019-20 kharif season, forecast of normal monsoons by the IMD and worries over export demand weighed on.

* Turmeric June futures on NCDEX on Thursday plunged to a multi year low on worries over demand and expectation of higher output.

* Cardamom June futures on MCX were unchanged on Thursday as well.

* Kerala government is considering holding online auctions of small cardamom through portals like e-National Agricultural Market owing to the ongoing lockdown due to the COVID-19 pandemic, Spices Board of India said in a release. The auction through eNAM will take place in collaboration with Kerala government's agriculture department 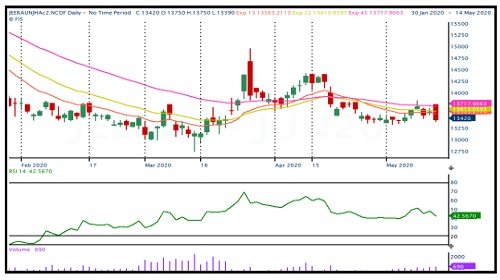 * All constituents in the oilseed complex fell on Thursday.

* MCX May CPO futures and NCDEX June Soy oil futures fell due to higher edible oil domestic stocks amid poor demand from hotels and restaurants because of ongoing lockdown.

* Exports of castor meal rose 32% on year to 24,330 tn in March. While export of castor jumped by nearly 43% to 538,956 tn from 375,954 tn in the same period of last year.  The demand for the vegetable oil is likely to decline further in the second half of 2020 due to disruption in economic activity caused by the COVID-19 pandemic, said Dorab Mistry, director of London-based Godrej International.

* Malaysia's crude palm oil production in the 2019-20 (Oct-Sep) marketing year is seen at 19.70 mln tn, 1.15 mln tn lower from the previous year, according to a report by the United States Department of Agriculture's Kuala Lumpur arm.

* India's edible oil imports fell around 34% on year to 790,377 tn in April, The Solvent Extractors' Association of India said in a release. 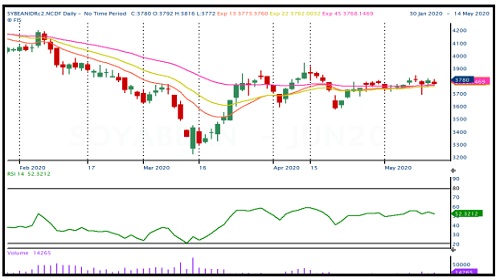 * The Foreign Agricultural Service India, an arm of the US Department of Agriculture, has projected Bangladesh's cotton imports at 7 mln bales (1 bale = 218 kg) in 2020-21 (Aug-Jul), up 4% on year on expectations of recovery in global markets after COVID-19.

* Andhra Pradesh aims to reduce the area under cotton in the coming 2020-21 (Jul-Jun) kharif season to 544,000 ha from 654,000 ha last year, a state government official said. Farmers are likely to shift from cotton as a bumper crop in 2019-20 led to a fall in prices. Also, sluggish domestic and export demand due to the spread of COVID-19 has led to ample stocks in the market.

* Research experts have advised cotton farmers to start sowing for the upcoming 2020-21 (Jul-Jun) season only by mid-June to prevent pink bollworm infestation.

* The International Cotton Advisory Committee has revised downward its 2019-20 (Aug-Jul) forecast for global prices due to a sharp fall in consumption as containment measures for COVID-19 have shut business activity, in its May report. With the opening stock of 18.6 mln tn for 2019-20 season, global supply of cotton is projected at 44.9 mln tn. The committee has scaled down its global cotton consumption to 22.9 mln tn, from 24.6 mln tn projected in the previous month.Global export is projected to fall 11% to 8.3 mln tn, compared with 9.3 mln tn estimated a month ago. Ending stock for the current season is seen at 21.9 mln tn, higher than 19.7 mln tn projected a month ago.For India, the committee sees consumption declining 4.75 mln tn in 2019-20 season, from 5.13 mln tn estimated in the previous month. Cotton output in India is estimated at 6.2 mln tn, higher from 6.0 mln tn estimated in April.

* UK-based Cotton Outlook has revised downward its global cotton consumption estimate for 2019-20 (AugJul) to 22.5 mln tn from 23.2 mln tn projected last month as a slump in business activity in wake of the ongoing COVID-19 crisis has led to a sharp fall in demand.

* Haryana procured over 502,000 tn of mustard and 2,188 tn of chana from farmers under the price support scheme as of Friday, an official with the state government said.

* The National Agricultural Cooperative Marketing Federation of India has procured 301,046 tn chana from eight states as of Monday, an official with the agency said. The crop is from the 2019-20 (Jul-Jun) kharif season.

* Madhya Pradesh has, so far, procured a total of just 913 tn of chana, masur and mustard harvested in 2019-20 (Jul-Jun) at minimum support price from 806 farmers, a senior state government official said on Monday.

* The National Agricultural Cooperative Marketing Federation of India has procured 214,287 tn of chana from farmers in Andhra Pradesh, Karnataka, Rajasthan, Telangana, Maharashtra and Uttar Pradesh as of Monday, an official with the agency said. The crop is from the 2019-20 (Jul-Jun) kharif season.

* The Madhya Pradesh government is mulling over increasing the quantum of procurement of mustard and chana each to 2.0 tn per ha per farmer, a senior state government official said.

* Gujarat State Cooperation Marketing Federation Ltd will begin procurement of chana and mustard in the state under the price distribution scheme from May 1, Chairman Dilip Sanghani said.

* The National Commodity & Derivatives Exchange has extended the event-based additional surveillance margin of 5% on guar gum contracts till May 27, the exchange said in a circular.

* ICEX June rubber futures ended inch down on Thursday, though for the past few session it is seen varying in narrow ranges. 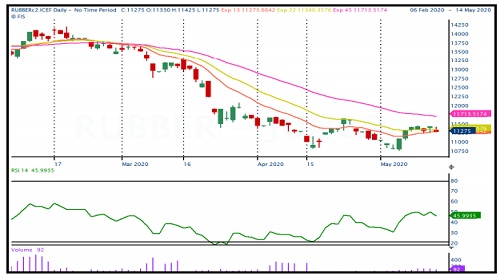