* Jeera January futures on NCDEX ended marginally up on Tuesday on improvement in demand. However, it was mostly seen in varying in narrow range, probably awaiting fresh cues for further directional moves.

* The key spot market of Unjha, Gujarat will remain shut from December 16-23 on account of local festival.

* Area under the spice in Gujarat, the largest producer, was at 277,017 ha as on Monday, compared with 268,368 ha a year ago, state farm department data showed.

* Coriander January futures on NCDEX ended more than two per cent up on Tuesday. Lag in sowing in Rajasthan, one of the key coriander producing state, lend support.

* Coriander acreage in Gujarat, the second-largest producer, was at 9,623 ha as on Monday, compared with 7,602 ha in the corresponding period last year, data from the state farm department showed.

* NCDEX has removed "less active" delivery centres for Coriander such as Jaipur, Guna and Baran. The revised terms for coriander will be applicable for the new crop contracts expiring from April 2020.

* Reports of stock damage in Nanded, Maharashtra lifted Turmeric futures on NCDEX on Tuesday. However, expectation of higher production this season weighed on, keeping gains under check.

* Cardamom MCX January futures posted losses for the first time in five days on Tuesday. The commodity may have probably came under profit booking after rising for the last four consecutive sessions. 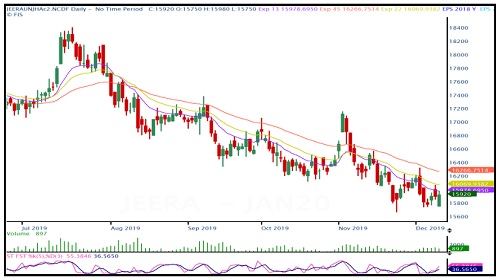 * Mixed sentiments witnessed on oilseed complex on yesterday. More active Jan soybean prices hit new three and half month high due to improved demand in the spot market amid worries over dip in output. Moreover, fall in arrivals in the spot market also supported the prices. Whereas, Jan Mustard futures witnessed a choppy trading session and later closed the day in positive note on back of improved demand at lower price levels amid lower arrivals.

* Imports of mustard oil were 75% lower on year at 59,171 tn in 2018-19 (Nov-Oct), according to data from the Solvent Extractors' Association of India.  Mustard acreage has narrowed at 5.91 mln ha as of last week against 6.024 mln ha in the year-ago period, according to agriculture ministry.

* Soybean Processors Association of India pegged soybean production at 8.9 mln tn this year, down 18% from 2018-19.

* India's soymeal exports fell around 85% on year to 50,000 tn in November, according to The Soybean Processors' Association of India data. The decline was due to disparity between global and domestic prices. During Oct-Nov, India exported 113,000 tn soymeal against 457,000 tn during the corresponding period last year.

* The area under kharif castor seed crop was down 21.9% on year at 189,500 ha in the week ended Thursday, according to data from the farm ministry, due to slower pace of sowing in Gujarat and Rajasthan,

* Malaysia's palm oil exports in November were estimated at 1.4 mln tn, down 7.4% on month, according to the private cargo surveyor AmSpec Agri. 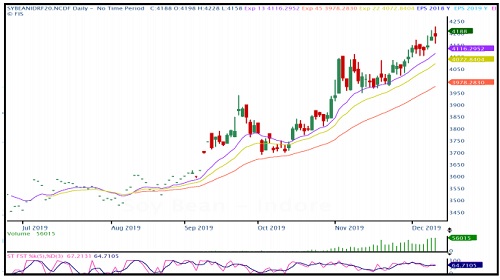 * MCX Clearing Corp has de-accredited Origo Commodities India Pvt Ltd at Rajkot in Gujarat for delivery of cotton bales from Wednesday, according to an exchange circular.

* Cotton trade publication Cotlook has adjusted its outlook for world cotton production slightly down this month - placing it at 26.25M metric tons, down 245,000 tons from a month ago. Even so, consumption is still at 25.6M tons, making the cotton surplus still relatively sizable according to Cotlook.

* Cotton Corp of India has procured around 100,000 bales (1 bale = 170 kg) of cotton so far in season started October. The official said procurement is likely to gather pace from middle of December once good quality cotton enters the markets. Currently, daily cotton arrivals in spot markets of India were estimated at 115,000 bales. The daily supply is seen rising to 200,000 bales from December. The corporation had procured 1.1 mln bales of cotton last year of which 850,000-900,000 bales remain unsold.

* The Cotton Association of India has estimated the country's crop for 2019-20 (Oct-Sep) season at 35.45 mln bales, up 13.6% on year due to an increase in area under the crop, and better yield. India's cotton acreage has increased by 5.3% to 12.71 mln ha. However, the percentage of Bt cotton acreage in the total area has gone up to 94% due to increased area under herbicide-tolerant Bt cotton. This is expected to boost the overall yield over the last year. India's total consumption to 31.5 mln bales, up around 350,000 bales from last year with mills seen consuming 27.6 mln bales, higher than 27.45 mln bales a year ago. The numbers are optimistic, given the slowdown in the textile sector, as indicated by the near 38% decline in cotton yarn exports in Apr-Sep. The yearending stock has been estimated higher at 4.6 mln bales from 2.3 mln bales for the previous year, mainly on account of increased output. 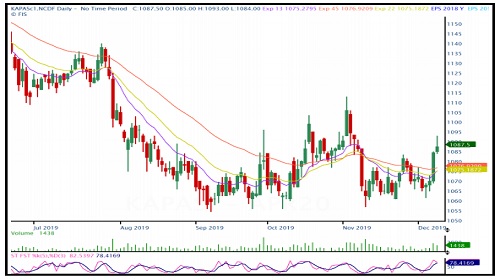 * Farmers in the country have sown chana across 7.2 mln ha as of Wednesday, down 6.2% on year, farm ministry data showed.

* National Agricultural Cooperative Marketing Federation of India has decided to "tentatively" offload 747,480 tn of mustard and 983,406 tn of chana over the next three months, the agency said in a statement on its website. The agency has about 1.7 -1.8 mln tn chana in stock, of which it wants to offload nearly 1 mln tn to keep prices in check, a NAFED official said. 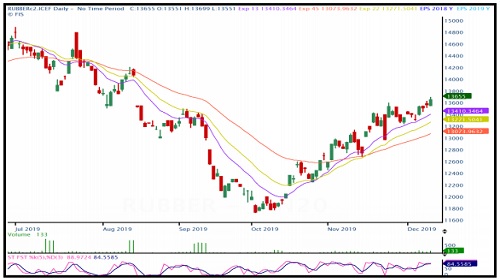