* Jeera April futures on NCDEX ended tad down on Tuesday in lacklusture trades. Absence of cues from the spot market owing to country-wide lockdown influenced the sentiments.

* Coriander April futures on NCDEX gained more than 1.5 per cent on Tuesday on worries over supply with spot market being closed due to lockdown. However, expectation of rise in production this rabi season may probably keep gains under check.

* Turmeric April futures on NCDEX resumed declining on Tuesday after rising in the previous day. Forecast of good crop in the 2019-20 kharif season along with lack of cues from the spot market weighed on.

* According to the data from the Spices Board, Indian exported 1405 tonnes of cardamom for Apr-Dec 2019 period, down 35 per cent compared to same period last year.

* After suspending e-auctions at Puttady and Bodinayakanur, Tamil Nadu until Mar 31 on Mar 16, the Spices Board resumed e-auctions at Puttady, Kerala on Mar 18.The board took the decision following permission from Kerala government, which has told auctioneers to provide masks to bidders and staff engaged in the auction. A maximum of 30 bidders will be allowed at the auction at a time, according to the circular. According to the circular issued by the Spices Board, the auction centre in Bodinayakanur will remain closed till further notice. 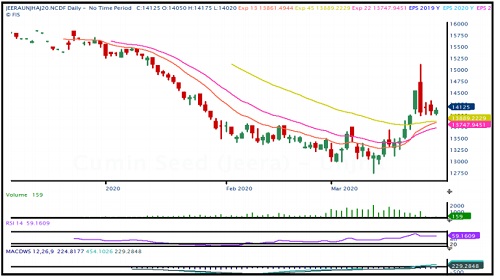 * All the commodities under oilseed basket fell on Tuesday due to profit booking.

*  NCDEX Apr Soybean futures settled lower as investors booked profit after a week rally. Apr Mustard seed futures prices also down tracking weakness in domestic soybean prices.  The Solvent Extractors' Association of India has estimated mustard output in India in 2019-20 (Jul-Jun) at 7.8 mln tn, up 3.7% from the previous year, primarily due to supportive weather conditions, it said in a report.  In January, soymeal exports slumped to 6,107 tn from 86,378 a year ago, according to data released by The Solvent Extractors' Association of India. In January, mustard meal exports also declined to 35,664 tn from 57,995 tn a year ago.

* In its 2nd advance estimate, The government has raised it soybean output estimate for 2019-20 to 13.6 mln tn against 13.5 mln tn pegged earlier. DGFT notified that import of RBD Palmolein and Palm oil under “restricted list” to regulate excessive import to India. In the meantime, Kolkata has issued licences for 88,000 tons f import of RBD Palmoilein from Nepal at Zero duty ynder SAFTA agreement.

* China's soybean imports is likely to increase by 3.0 mln tn to 88.0 mln tn, which reflects higher crushing of soybean in the country. The agency has pegged the US's soybean exports this year at 49.7 mln tn, up from 48.3 mln pegged earlier. For Brazil, exports during the year are seen at 77.0 mln tn, 1.0 mln tn higher than the previous estimate.

* Malaysia's palm oil output in February rose 10% on month to 1.3 mln tn, according to the Malaysian Palm Oil Board data. Inventory of total palm oil in the country fell 4.2% to 1.7 mln tn in February. Stocks of processed palm oil in the country was at 838,634 tn in February against 910,484 tn a month ago, while that of crude palm oil were at 842,965 tn compared with 844,930 tn in January. According to the Malaysia Palm Oil Board, palm oil exports in February was largely unchanged at 1.1 mln tn while bio-diesel exports fell nearly 63% to 21,790 tn.

* Exports of palm oil and its derivatives during Mar 1-20 were 20% lower on month at 654,440 tn, private cargo surveyor AmSpec Agri Malaysia said. 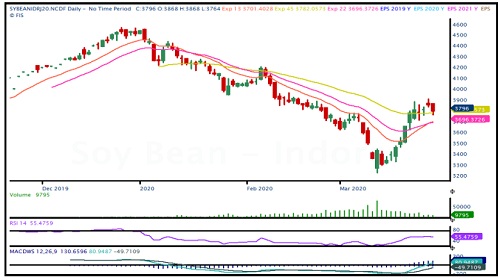 * Cotton Corp of India has halted procurement of the fibre at its centres due to closure of spot markets after the Centre imposed a 21-day nationwide lockdown to curb the rapid spread of coronavirus in the country, Chairman and Managing Director P. Alli Rani said.

* Deals to export around 150,000 bales of cotton mainly to Bangladesh and a few to China have been put on hold due to disruption in business and transport services because of the spread of coronavirus, said traders.

* The Cotton Association of India has maintained its estimate for production in the country in the 2019-20 (Oct-Sep) season at 35.45 mln bales (1 bale = 170 kg), up 13.6% from the last season. Considering the opening stock of 3.2 mln bales, the cotton body expects the total supply to be around 41.15 mln bales in the current season. It retained its estimate of 4.2 mln bales for exports and pegged imports at 2.5 mln bales. Domestic consumption is expected to be 33.1 mln bales, unchanged from the previous month's estimate. Closing stock of cotton for the 2019-20 season is now pegged at 3.85 mln bales.

*  Procurement by state-owned Cotton Corp of India in the current marketing year that began on Oct 1 has exceeded 5.8 mln bales (1 bale = 170 kg). India is likely to harvest 36.0 mln bales, of which around 55% has already arrived in the market, and CCI has bought nearly 28%. According to CCI, it aims to procure 6.5-7.0 mln bales of the crop in the current year, though this would depend on the price and the quality, this being the fag end of the harvest season, which is over sixfold higher than 1.1 mln bales procured the previous year.

* Global ending stock of cotton is seen at 1.16 mln tn compared with 207,000 tn projected in February, the agency said. 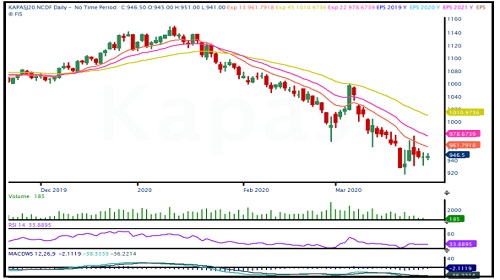 * Chana April futures on NCDEX stretched the previous day’s losses to end more than one per cent down on Tuesday. Lack of cues from the spot market weighed on.

* The National Agricultural Cooperative Marketing Federation of India has procured 21,208 tn of chana from farmers in Andhra Pradesh and Karnataka as of Tuesday, an official with the agency said.

* The National Agricultural Cooperative Marketing Federation of India has stocks of 1.6 mln tn of chana, which the agency bought under the price support scheme in the 2019- 20 (Apr-Mar) rabi season.

* A mixed trend was seen in the guar futures on Tuesday, with the guarseed April futures on NCDEX ending marginally down, while guargum April futures ending the session in green. However, both the commodities trading in narrow ranges, awaiting cues for further cues.

* As per the Agricultural and Processed Food Products Export Development Authority, India shipped 19% lower guar derivatives products to 267823.67 MTs in the first eight month of this financial year against 330974.88 MTs in 2018-19 during the corresponding period of time.

* Lacklusture moves were witnessed in ICEX rubber futures on Tuesday, with the near month April futures ending rather flat. Spot market in Kerala being closed due to lockdown and worries over demand weighed on as well.

* The global consumption of natural rubber is seen lower as industrial activity has been weak in most countries, including China and India, the Association of Natural Rubber Producing Countries said in a release. The association estimated natural rubber consumption may have fallen 19.6% on year in Jan-Mar. 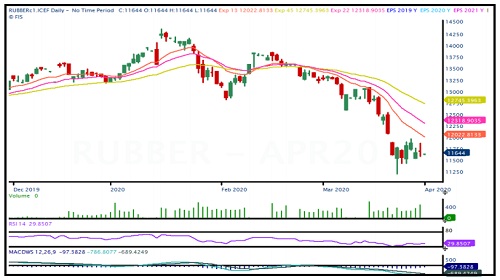 Entities with up to Rs 250 cr turnover, excluding exports, to be medium enterprises