* Choppy trades were witnessed in Jeera June futures on NCDEX on Friday. Amidst estimates of higher crop, tepid demand along with rise in arrivals in the spot market weighed on overall market sentiments.

* Coriander June futures on NCDEX rose more than 3.5 per cent on Friday on improved demand amidst fall in arrivals in the spot market.

* Turmeric June futures on NCDEX jumped nearly four per cent to hit its highest level in about two weeks on Friday. Fall in arrivals in the main spot market of Nizamabad along with export demand pushed up the prices of the yellow spice.

* The agricultural mandis in Nizamabad, Telengana, have resumed trade on Wednesday after remaining shut for over two months due to a nationwide lockdown imposed to curb the spread of coronavirus pandemic

* Cardamom June futures on MCX was unchanged on Friday as well.

* The average price of small cardamom at the e-auction held on Jun 5 in Puttady, Kerala, was 1780.4 rupees per kg, data from Spices Board India showed. The highest price at auction, conducted by Sugandhagiri Spices Promoters & Traders Pvt Ltd, was 2,210 rupees per kg. A total 91.25 tn of cardamom was up for auction, all of which were sold.

* Small cardamom auctions in Puttady, another e-auction centre in Kerala, will resume from May 28, the board said in a circular. The board will hold one auction at this centre on alternate days between 1030 IST to 1600 IST till it gets approval to conduct two auctions daily. 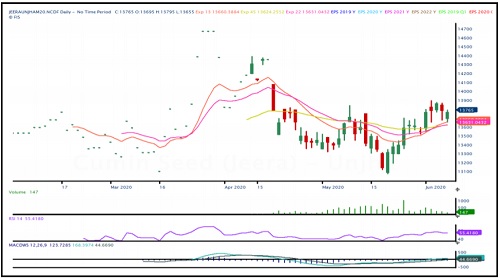 * Except CPO, all commodities in the edible oil seed basket rose on Friday.

* NCDEX June Soybean futures traded higher due to lower arrivals in the spot markets because of lean supply season along with gains in U.S CBOT soybean prices on report of higher overseas demand in U.S. June Mustard seed settled marginally higher on back of higher demand amid lower arrivals.

* India's edible oil imports fell around 40% on year to 707,478 tn in May, The Solvent Extractors' Association of India said in a release.

*  The US Department of Agriculture has pegged global oilseed production in 2020-21 at 605.9 mln tn, compared with its estimate of 575.2 mln tn for 2019-20, primarily due to higher soybean production in its report for May. The report has pegged global soybean output 26.6 mln tn higher on year at 362.8 mln tn. For Brazil, soybean output is seen rising by 7.0 mln tn to 131.0 mln tn. Production of the oilseed in the US, is also seen rising by 15.5 mln tn to 112.3 mln tn. In Argentina, another key grower, soybean output is expected to be 2.5 mln tn higher at 53.5 mln tn. Global production of high-oil content seeds is projected up 3% from 2019- 20 on increased canola production for Canada, Australia, and Ukraine, and higher sunflower seed production for Argentina and Ukraine. Partly offsetting is lower sunflower seed production for Turkey. Demand for protein meal from China is also seen higher on year in 2020-21. Global protein meal consumption outside of China is projected to increase 2% in 2020-21, down from the prior five-year average of 3% due to the slowing global economy. Given the higher demand for protein meal, global soybean exports are expected to increase by 8.0 mln tn to 161.9 mln tn during the period. Of these stocks, China is seen buying the largest share at 96.0 mln tn. 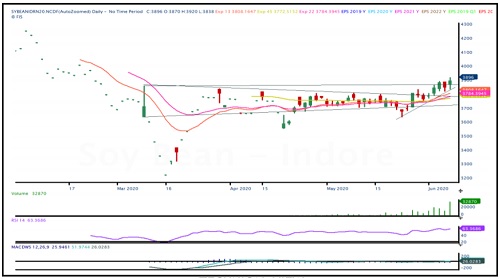 * India's closing stock of cotton are expected to shoot up significantly, after having remained range-bound over the past two to three years. Cotton prices in India are likely to remain under pressure as supply exceeds demand. However, higher support prices are expected to act as a floor and will prevent a major fall.

* The International Cotton Advisory Committee sees 2019-20 (Aug-Jul) season ending stocks at a five-year high as consumption and trade have been hit due to the COVID-19 pandemic.The committee estimated global cotton ending stock for the ongoing season at 21.75 mln tn compared with 18.63 mln tn last year. Global consumption is expected to decline 11.3% on year at 23.06 mln tn. In China, the world's top consumer, cotton consumption is expected to fall to 7.25 mln tn in 2019-20 season, while in India it is projected to decline to 4.75 mln tn. Global exports are projected to fall 8.1% on year to 8.34 mln tn.The committee has increased its price forecast for Cotlook A index, a global benchmark for prices of raw cotton, by a cent from the previous month to 72 cents per pound for 2019-20. 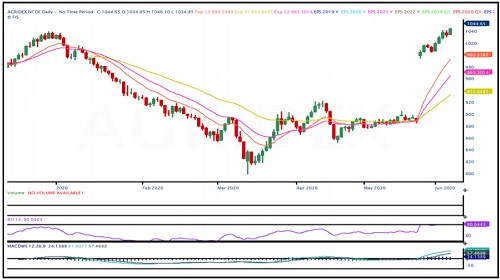 * Madhya Pradesh has extended the procurement period for chana, masur and mustard harvested in 2019-20 (Jul-Jun) to Jun 10 from May 30 as the buying so far has been dismal.

* The Rajasthan State Co-operative Marketing Federation has procured 264,505 tn mustard and chana from 104,467 farmers at the minimum support price for 12.3 bln rupees, the government said in a press release.

* ICEX June rubber futures ended up on Friday supported by positive cues from the overseas market and on expectation of improvement in local demand with lockdown ruled being relaxed.

* The Association of Natural Rubber Producing Countries has cut its estimate for production of natural rubber in 2020 further to 13.1 mln tn from 13.4 mln tn pegged a month ago. At 13.1 mln tn, the output is seen 4.7% lower on year. The association has also reduced its estimate for global natural rubber consumption to 12.9 mln tn compared with 13.0 mln tn pegged earlier. At 12.9 mln tn, the demand for natural rubber is seen 6% lower on year. The outlook for the global demand has been revised downward as the outbreak of the COVID-19 pandemic and the subsequent lockdown in many countries are seen hitting demand for the commodity, the association said.

* The Directorate General of Trade Remedies has recommended provisionally raising import duty on polybutadine or synthetic rubber from South Korea to those imported from other countries, according to reports. Currently, the basic customs duty on the product is 10%, but imports from South Korea attract concessional duty under the pact. The Directorate General of Trade Remedies has suggested provisional safeguard duties for 200 days, by when it will come up with its final report. 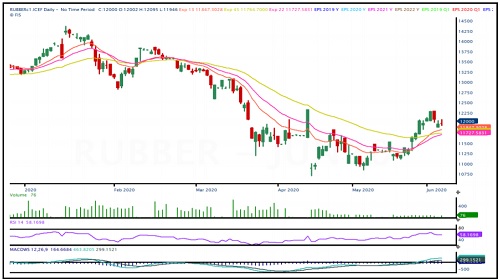 Gold ETF holding is also falling more than a million ounce in this month By Anuj Gupta, Angel Broking

The trend of Gold and silver now become sideways to down and expectation of safe By Anuj Gupta, Angel Broking

Will Gold add shine to this Diwali? Authored Article on Gold by Mayur Joshi, Yes Securities

Gold prices increased by 0.86% and closed at 50600 levels By Anuj Gupta, Angel Broking