* On Thursday, Jeera January futures on NCDEX was seen trading in narrow ranges.

* The key spot market of Unjha, Gujarat will remain shut from December 16-23 on ac-count of local festival.

* Jeera acreage in Gujarat, the largest producer, was at 59,710 ha as on Monday, com-pared with 1.2 mln ha in the corresponding period last year, state farm department data showed.

* Coriander acreage in Gujarat, the second-largest producer, was at 9,623 ha as on Mon-day, compared with 7,602 ha in the corresponding period last year, data from the state farm department showed.

* NCDEX has removed "less active" delivery centres for Coriander such as Jaipur, Guna and Baran. The revised terms for coriander will be applicable for the new crop con-tracts expiring from April 2020.

* On Thursday, the front month Turmeric pared previous session losses and ended more than one per cent up. However, expectation of higher production and tepid demand weighed on overall market sentiments, keeping gains under check. 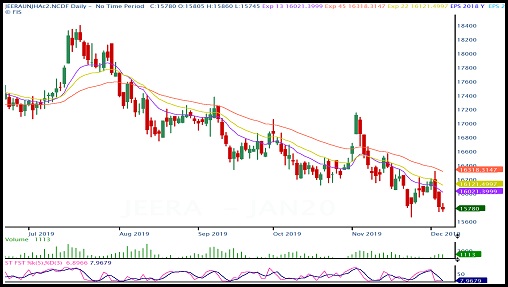 * Except soybean all other commodities under oilseed complex rose yesterday. More active Dec soybean prices extended correction due to higher arrivals in the spot market with subdued demand from crushers. Whereas, Dec Mustard futures traded higher on back of rise in demand at lower price levels.

* Mustard acreage has narrowed at 5.54 mln ha as of last weej against 5.86 mln ha in the year-ago peri-od, according to agriculture ministry.

* SOPA pegged soybean output this year could be at 9.0 mln tn, just two-thirds of the government's estimate of 13.5 mln tn.

* India's exports of mustard meal in October jumped 26% on year to 44,010 tn owing to firm demand from South Korea, according to the Solvent Extractors' Association of India.

* Soymeal exports slumped 83.5% on year to 24,740 tn in October, according to data released by The Solvent Ex-tractors' Association of India

* Malaysia's palm oil exports in November were estimated at 1.4 mln tn, down 7.4% on month, according to the private cargo surveyor AmSpec Agri. 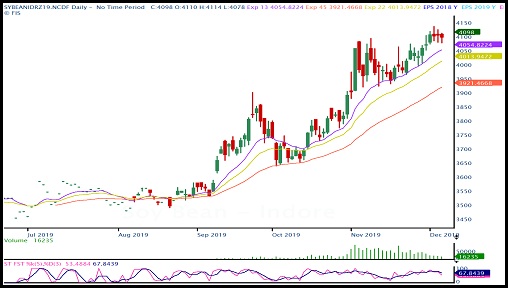 * Cotton Corp of India has procured around 100,000 bales (1 bale = 170 kg) of cotton so far in season started October. The official said procurement is likely to gather pace from middle of December once good quality cotton enters the markets. Currently, daily cotton arrivals in spot markets of India were estimated at 115,000 bales. The daily supply is seen rising to 200,000 bales from Decem-ber. The corporation had procured 1.1 mln bales of cotton last year of which 850,000-900,000 bales remain unsold.

* The Cotton Association of India has estimated the country's crop for 2019-20 (Oct-Sep) season at 35.45 mln bales, up 13.6% on year due to an increase in area under the crop, and better yield. India's cotton acreage has increased by 5.3% to 12.71 mln ha. However, the percentage of Bt cotton acreage in the total area has gone up to 94% due to increased area under herbicide-tolerant Bt cotton. This is expected to boost the overall yield over the last year. India's total consumption to 31.5 mln bales, up around 350,000 bales from last year with mills seen consuming 27.6 mln bales, higher than 27.45 mln bales a year ago. The numbers are optimistic, given the slowdown in the textile sector, as indicated by the near 38% decline in cotton yarn exports in Apr-Sep. The year-ending stock has been estimated higher at 4.6 mln bales from 2.3 mln bales for the previous year, mainly on account of increased output. 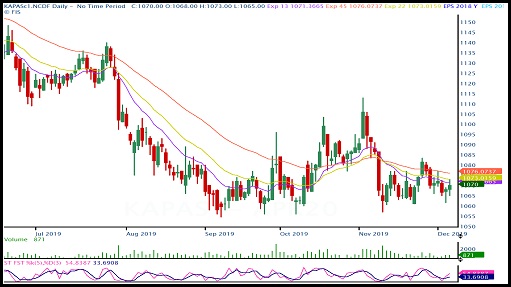 * The area under rabi chana across the country was at 6.2 mln ha as of Wednesday, 10% lower from a year ago, according to data from the farm ministry.

* National Agricultural Cooperative Marketing Federation of India has decided to "tentatively" offload 747,480 tn of mustard and 983,406 tn of chana over the next three months, the agency said in a statement on its website. The agency has about 1.7-1.8 mln tn chana in stock, of which it wants to offload nearly 1 mln tn to keep prices in check, a NAFED official said. 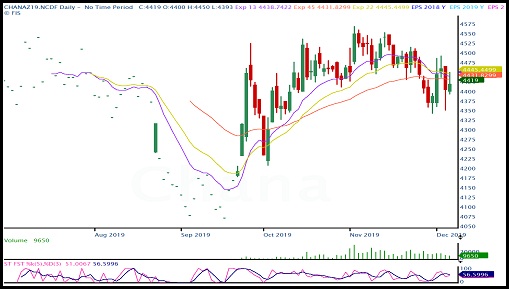