Investors could use any corrections as an opportunity to add more gold to their portfolio By Mr. Chirag Mehta

A Fiscal Stimulus Is Due, And So Is A Gold Price Rally by Chirag Mehta Quantum Mutual Fund

Below is the Views On A Fiscal Stimulus Is Due, And So Is A Gold Price Rally by Chirag Mehta Quantum Mutual Fund

As the global economy hits the worst recession since the Great Depression of the 1930s due to the COVID-19 pandemic, extraordinary policy actions have been taken globally to provide relief to those affected. So far countries around the world have announced fiscal support of about $8 trillion to fight the pandemic.

Fiscal support as a percentage of GDP 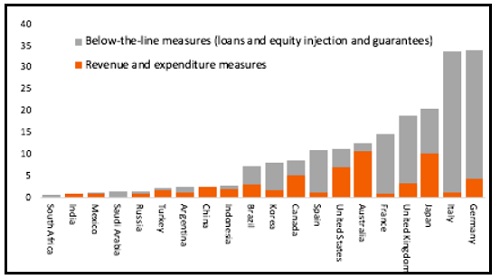 The support is divided into two measures -- overt spending by governments that increases the fiscal deficit and ‘below the line’ liquidity support measures such as guarantees that involve contingent liabilities outside budget revenues and expenditures.

It is notable that the support given by the Indian government is far less than that given by other countries. The Indian government has announced a Rs 1.7 lakh crore or $22.6 billion stimulus plan to cushion the economic damage caused by the virus-induced nationwide lockdown. This stimulus is equivalent to less than 1% of the GDP. Compared to countries such as Japan and the US that have announced stimulus packages worth 20% and 10% of GDP, respectively, this seems grossly inadequate.

It is thus expected that the Indian government will soon be coming up with a larger stimulus package to keep the economy afloat, especially given that India had its own macroeconomic problems even before the viral outbreak. This will exert pressure on an already rising fiscal deficit, with some agencies estimating that fiscal deficit in 2020-21 may shoot up to 6.2% of the GDP from the current target of 3.5%.

In addition, the lockdown will adversely impact the output and will cause a large drop in tax collections for the government. The IMF has slashed India's GDP growth projection to 1.9% in 2020, the slowest since the economy was liberalized 30 years back, due to a complete halt in economic activity to contain the spread of COVID-19.

The consequence would be that India’s fiscal deficits would see a sharp rise and that combined with reduced output would result in a sudden rise in the already high debt-to-GDP ratio of 70%, which, in turn, will weaken India’s credit profile.

The risk-off sentiment in global markets combined with India’s deteriorating credit profile will make the currency susceptible to sell-off by foreign institutional investors. This could lead to depreciation of the rupee. And given that the rupee is currently overvalued by 6% when compared to the long term average of the Real Effective Exchange Rate: Trade Weighted index, there is a lot of room for that.

As India imports all of its gold, a falling rupee could push up landed gold prices locally. Investors can thus use this opportunity to build exposure to the metal as further depreciation in the rupee will add to gold’s returns.

Investors could use any corrections as an opportunity to add more gold to their portfolio By Mr. Chirag Mehta