Mumbai: The budget proposal to impose an additional surcharge on India’s top earners may net the government a paltry sum, but damage investor confidence, force the wealthy to find loopholes or relocate to other countries and hit individuals who have made a large one-time gain, said experts.

On Friday, finance minister Nirmala Sitharaman proposed to raise the surcharge on individuals earning ₹2-5 crore a year to 25%. For those earning more than ₹5 crore, it was increased to 37%, raising the effective income tax rate on the two highest slabs of income earners to 39% and 42.7%, respectively. A surcharge is a tax on tax and is levied on the tax amount you are liable to pay.

Tax on India’s wealthiest has seen several increases in recent years. The 2013 budget first imposed a surcharge of 10% on those earning over ₹1 crore. This was increased to 12% in the 2015 budget and 15% in the 2016 budget. The 2017 budget brought yet more people into the surcharge net by levying it on those earning over ₹50 lakh. Justifying the surcharge, Sitharaman said the rich needed to contribute more to nation building. But given the small base of such individuals—only 102,000 people of India’s 1.3 billion population reported an income of over ₹1 crore as of March—a hike in surcharge may not net significant tax revenues, according to experts. 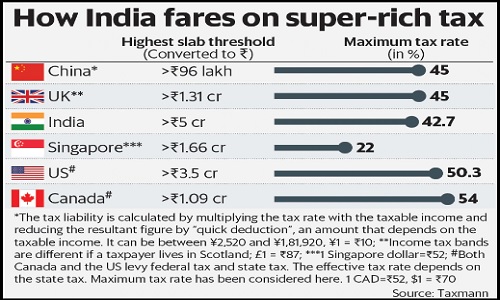 Experts have also questioned whether the psychological effect of a steep tax increase is commensurate with the additional revenue the government might get. “The additional surcharge may drive entrepreneurs and other high net worth individuals out of India," said Prakash Hegde, a Bengaluru-based chartered accountant. “Considering the low incremental revenue the government is estimating from the surcharge, the effect on business confidence is hard to justify."

However, successive increases in surcharge have made it an important source of revenue for the government. The revenue from surcharge on individuals jumped from ₹738 crore in FY14 to an estimated ₹39,618 crore in FY20. In percentage terms, the share has gone from 0.3% to 7% of total income tax collected from individuals.

But as with everything, there are loopholes that will cause leakages, according to Gautam Nayak of accounting firm CNK and Associates. “Super-rich individuals may incorporate limited liability partnerships (LLP) and deliver their services through them. LLPs are relatively easy to form and pay a 12% surcharge. The income distributed by an LLP is tax-free in the hands of its partners," he said.

Other experts pointed out that middle class families might also be affected. Such families with income from property sales will face higher tax outgo in the year of sale, said Sandeep Jethwani, head of advisory at IIFL Wealth. “Such individuals should make use of the deductions on capital gains tax available under Sections 54, 54 F and 54 EC in order to minimize their tax liability," said Hegde.

Opinion | The first down payment towards the growth goal

Opinion | Some budget suggestions that are easy to implement

Opinion | Modi 2.0 needs to reverse the downslide of the public sector