Budget takes  some heat off RBI on growth, inflation back in spotlight

It is back to inflation targeting for the Reserve Bank of India’s (RBI’s) rate-setting committee, when its six members meet to vote on policy rates this week.

Analysts expect a pause in rate cuts from the central bank, and they would be right, considering that the Union budget did precious little to move the needle anywhere for monetary policy.

The last reading on headline retail inflation for the central bank was an unflattering 7.35% for December. 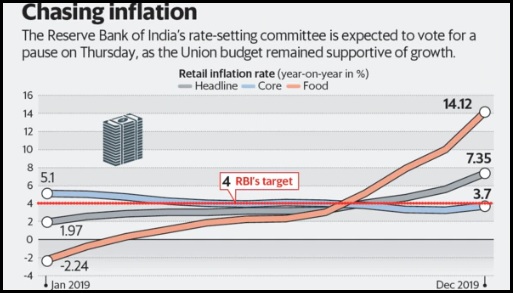 The mandate for RBI is to keep the headline number within the 2-6% band and the central bank has ostensibly targeted the mid-point of 4% so far. With inflation breaching the upper bound, monetary policy is hard pressed to not ignore it.

The Union budget is a key input for monetary policy as the government’s finances have a bearing on growth, inflation and, more importantly, interest rates.

The revised estimates for the current year from the budget indicate that the government has refrained from heavy spending. The slippage in fiscal deficit of 0.5% of gross domestic product (GDP) is largely due to lower tax revenue growth, rather than an increase in spending. The increase in spending for FY21, too, is at a modest 13%, with an indication of bringing down the fiscal deficit to 3.5% of GDP. Ergo, some analysts have termed it a contractionary budget.

Even so, the government has allocated resources to boost the rural sector, reiterated its commitment to spend on infrastructure and also offered to leave more cash in the hands of the people through lower income-tax rates. The disappointing factor is that all these measures have riders, which the market didn’t like.

Radhika Rao, senior vice president and economist at DBS Bank India Ltd, said this takes at least some of the heat off the monetary policy on growth. “With fiscal policy taking a growth-supportive role, on the back of monetary policy being ahead of the curve last year, the calibrated policy mix should bode well for growth," she wrote in a note. Rao expected RBI to remain on an extended pause but keep the stance accommodative.

A commitment to fiscal prudence, a realistic assumption about future growth and steps to attract more foreign capital to the bond market are all helpful measures from the budget for the central bank.

But it is not as linear as that. Bond yields may have eased after the budget, but the over-reliance on small savings by the government risks keeping interest rates from falling. The borrowing from national small savings fund was revised to ₹2.4 trillion in the budget for the current fiscal year. That is nearly double the previous estimate. For FY21, too, the government is keeping a similar borrowing target.

As the government continues to corner household savings, banks won’t be able to cut deposit rates and, hence, lending rates.