NEW DELHI: Over the past week, as the details of the 2019-20 budget have been digested, markets have reacted strongly. The Sensex, driven by concerns about the new tax regime, fell by over 2.94% over the week. In contrast, bond markets enjoyed a rally because of the government’s decision to borrow money from abroad, which could squeeze the supply of government bonds in the market.

As the markets reacted, others have questioned the budget’s data and speech. In terms of data, the revenue receipts provided in the budget documents did not match the estimates from the Economic Survey . And, in the speech, finance minister Nirmala Sitharaman did not mention any specific budgetary allocations. 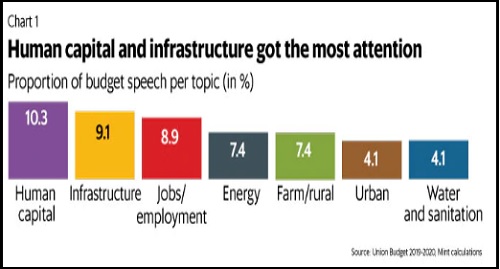 From infrastructure to education, Sitharaman’s speech covered several themes. Some of these themes were mentioned more than others, which could have meant greater budgetary allocations towards the theme.

However, a Mint analysis of the speech suggests that there is a mismatch between budget rhetoric and budget expenditure. In almost all cases, the themes spoken about the most were allocated relatively less money. 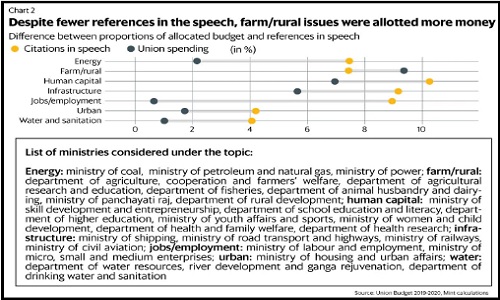 This analysis covers Part A of the 2019-20 budget speech that focuses on the macroeconomy and major policy developments. Based on its contents, each paragraph of the speech was categorized into nine possible themes: agriculture/rural, energy, infrastructure, human capital, jobs/employment, urban issues, and water and sanitation.

Human capital, which includes health, skills and education issues, was covered the most in the speech with 10% of all the words touching upon a human capital-related issue. Infrastructure comes a close second with 9% of words (Chart 1). In both cases though, the proportion covered in the budget speech exceeded the proportion spent on the theme. Of the total budget expenditure, only 7% was spent on human capital, which includes spending on all human capital related ministries, and 5.6% was spent on infrastructure .

In contrast, certain themes, such as farm and rural issues, were spoken about less in the budget, but received higher allocations. These findings confirm that the budget rhetoric on a certain theme does not necessarily imply policy focus on it. And Sitharaman is not unique in that regard. Previous finance ministers’ speeches, too, have experienced similar disconnect. The full transcript of the speech and its thematic categorisations are presented here.