Stimulus can be given either by way of changes in taxes or higher expenditure. India’s nominal gross domestic product (GDP) growth fell to a low of 6.1% in the second quarter of this fiscal. This was the lowest growth in the new 2011-12 base GDP series. GDP growth would have been lower still, but the latest official estimates show that it received a boost from public and defence services that grew 11.6% in the second quarter as compared to 8.6% a year ago. Thus, government expenditure can boost growth in the interim. However, a prolonged stimulus must be avoided as it will stoke inflation and lead to stagflation.

Is there fiscal space for a strong stimulus?

No. The government’s capacity is constrained by low tax revenues so far. Data from the Controller General of Accounts shows that growth in gross taxes during the first seven months of FY20 was the lowest since FY10. Already, the Centre has sacrificed revenues by cutting corporate tax to 22%. The only silver lining is the non-tax revenues growth of 75.5% during April-October. A slippage to 4.75% of GDP in the Centre’s fiscal deficit is estimated by ICRA and EY even in the absence of a stimulus. A temporary deviation from FRBM targets is possible in the current situation. However, there are limits even to that.

No. Growth needs a boost urgently. Spending on long-gestation projects in highways and railways will not help. As the demand contraction originated in the unorganized sector, stimulus should be given to it. Expenditure under PM-KISAN and NREGA can boost rural incomes and consumption by putting money in the hands of those who tend to consume more. 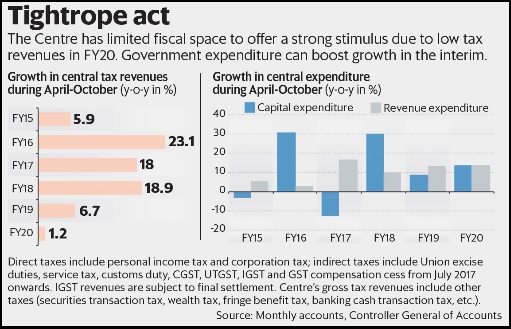 What about income tax cuts as stimulus?

No. Income tax cuts will benefit a small section of people, as only 5% of India’s population pays income tax. February’s interim budget had given an income tax rebate to those earning up to ₹5 lakh that left nearly ₹1,000 a month more in their wallets. Capital exemption on sale of one house was extended to two. Standard deduction for the salaried was raised from ₹40,000 to ₹50,000 and tax deduction on interest from savings in bank accounts was increased from ₹10,000 to ₹50,000. Still the slowdown deepened.

What should the government do then?

When economic growth slows down, so do tax collections. But if expenditure levels are maintained, the fiscal deficit goes up, as it is expressed as a percentage of GDP. The lower denominator—lower nominal GDP growth—widens the fiscal deficit. Keeping expenditures unchanged, or automatic stabilizers, can be used to stimulate growth, as was done in the aftermath of the global financial crisis in 2008.

Puja Mehra is a Delhi-based journalist.

What is Economic Survey