IPO fundraising in India drops by 32 per cent

A brief history of budget speeches in India

In his famous 1991 budget speech ushering in radical reforms that would change the face of the economy and the country forever, India’s then finance minister, Manmohan Singh, quoted the writer Victor Hugo to emphasize how India’s time to take a high seat at the global table had arrived. Singh was making his speech in the immediate aftermath of one of the worst economic crises India had ever faced and the reforms he unveiled were a response to the dire circumstances that the country was then staring at.

The words the finance minister would choose to signal India’s intent at that juncture would be as important as the steps he took. And he did not disappoint, not on that occasion. “...As Victor Hugo once said, ‘no power on earth can stop an idea whose time has come’," said Singh in his maiden budget speech. “I suggest to this august House that the emergence of India as a major economic power in the world happens to be one such idea. Let the whole world hear it loud and clear. India is now wide awake. We shall prevail. We shall overcome." 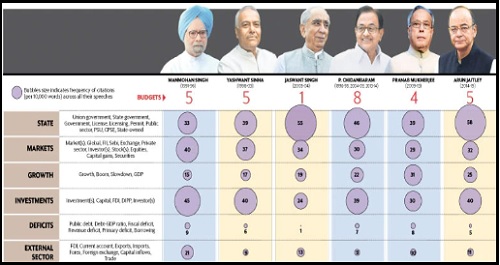 The world heard the message and the flow of foreign investments that opened up then have only become stronger over time, ensuring that India did not have to face another external crisis as the one it did in 1991. There was indeed a mini-balance of payments crisis in 2013 when Singh was the prime minister, but the scale was certainly nothing like what India overcame nearly three decades ago. 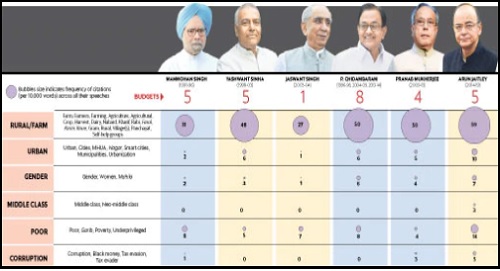 Chidambaram delivered relatively smaller budget speeches (12,830). With eight budgets under his belt, he also holds the record of the second highest number of budget speeches by an Indian finance minister, right behind Morarji Desai who delivered 10.

All these budget speeches during the period, which was delivered by men—a record Nirmala Sitharaman will break with her 5 July speech—have some common patterns and several differences. Across all the speeches, references to women or gender were rare.

References to urban issues (including related terms such as urbanization and cities) and the middle class were also rare. On all of these issues, Jaitley made slightly more references (per 10,000 words) compared to his predecessors.

Jaitley’s reference to infrastructure was closely followed by Jaswant Singh. The poor also found the most references in Jaitley’s speeches, followed by Manmohan Singh and Chidambaram.Chidambaram referred most to human capital (and related terms such as health, education, and nutrition), followed by Jaitley.

Mukherjee mentioned the environment and related terms more than any other finance minister in this period.

IPO fundraising in India drops by 32 per cent

A brief history of budget speeches in India

5 things to know as India gears up for Union budget

How is the Union Budget prepared?

Suzlon Energy to continue with rights issue opening next week