*The presentation of the FY21 Union Budget faces a challenging macro backdrop with economic growth at decadal lows, inflation breaching the upper threshold of the targeting band, and business and consumer sentiment appearing extremely subdued

* The INR 2.8 tn expected shortfall in net tax revenue collection in FY20, its Achilles’ heel, which coupled with the likelihood of INR 0.5-0.6 tn slippage in disinvestment revenue will come in the way of the budgeted fiscal consolidation. We expect the government to invoke the FRBM escape clause and present the revised fiscal deficit for FY20 at 3.8% vis-à-vis the budgeted target of 3.3%. This would minimize the extent of required cuts in expenditure, the only bright spot in driving GDP growth momentum off late.

* The anticipated 0.5% fiscal slippage is expected to be predominantly funded by additional market borrowing of INR 400 bn and higher than budgeted accretion (by INR 234 bn) under small savings

* In FY21, we expect the government to revert to its objective of consolidation by targeting fiscal deficit at 3.6% of GDP

·         The fiscal consolidation process in FY21 would be receipt led and supported by moderate improvement in tax buoyancy, rolling over of the disinvestment pipeline, and telecom related revenue. We expect the Expenditure-GDP ratio to be maintained at 13.1% in FY21.

* The FY21 Union Budget could potentially be used to signal fundamental shifts in fiscal credibility by focusing on realistic budget arithmetic, redesigning the FRBM roadmap, providing clarity on off-balance sheet expenditure, and also laying the groundwork for the establishment of an independent Fiscal Council

* Pickup in rabi sowing, accommodative monetary and liquidity stance, and some positive development on the global trade war front would enable a back loaded recovery in FY20

* CPI inflation breached the upper threshold of RBI’s inflation targeting band of 6% for the first time in Dec-19 by coming in at 7.35% YoY led by persistence of food price pressures, firmness in fuel prices, and re-pricing of telecom tariffs

* We expect incremental food price pressures to start reversing from Jan-20 onwards on late arrival of kharif produce. However, recent firmness in global food prices along with crude oil prices needs to be watched.

* Subdued core inflation continues to signal weak demand conditions in the economy. However, re-pricing of telecom tariffs and steep rise in few generic drugs will provide an upside

* Basis three consecutive months of upside surprise in CPI inflation prints and after incorporating larger than anticipated pressure on food prices, we revise upwards our FY20 CPI inflation forecast to 4.7% from 4.2% earlier, and vis-à-vis 3.4% in FY19. Having said so, we believe, headline inflation will likely average close to 6.5% in Q4 FY20 before moderating somewhat towards 6.0% levels in H1 FY21. With favorable base effect kicking in thereafter, inflation could decelerate sharply towards 3.5% in H2 FY21.

* With inflation likely to stay elevated (above 6%) in the near term, we expect RBI to stay on pause until Sep-20

* While the headline fiscal deficit has weak relationship with bond yields, the overall policy framework (global and domestic monetary and liquidity polices), fiscal surprises, and debt management strategies like buybacks and switches do influence bond yields

* In addition, central bank actions in the form of OMOs and Operation Twist also influence bond yields – both these tools are currently deployed by the RBI

* The incremental global backdrop has turned less supportive with market participants expecting just about one rate cut from the US Fed over the course of next 1Y and almost a status quo scenario from other G6 central banks.

*INR weakened by 3.3% in FY20 so far, in line with the trend seen in the broader EM FX space

* More than the fisc, it’s the twin deficits that matter for INR

*While growth-inflation balance is turning out to be unfavorable for INR, compression in current account amidst a relatively healthy capital account is found to be supportive. We expect FY20 CAD to nearly halve at 1.0% of GDP from 2.1% in FY19. We expect FY20 BoP to print a surplus of USD 45 bn vis-à-vis a deficit of USD 3 bn in FY1

* As India's CAD gets compressed and domestic (easing of capital account restrictions) and global (liquidity push by Fed and ECB) factors support capital inflows, we expect RBI to continue with reserve accumulation strategy so as to prevent any further overvaluation of domestic currency (currently we estimate inflation adjusted fundamental value of USDINR in the range of 74-75). Over the course of next 12-months, we expect USDINR to trade in the 69.0-73.0 range. 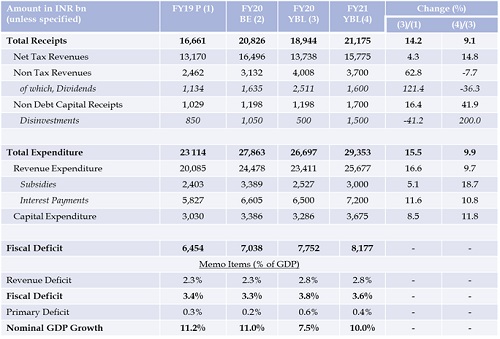 The budget definitely provides a holistic approach to the tourism sector By Mr. Pranav Maheshwari

Views On Pre-Budget 2020: Sectoral expectations from the budget by Mr. Jyoti Roy

Rural and infra related themes are likely to do well ahead of budget By Mr. Santosh Meena

Quote on Market Closing : It is a pre-budget rally where global tailwind is also supporting the current bull run by Santosh Meena