* While the Nifty continues to remain range bound around 10700, the broader market is witnessing a continued recovery. Globally also, the same trend is visible with stocks from the metal space garnering significant buying interest. Domestically, we believe stocks like Tata Steel will resume their fresh uptrend after hovering in a small range for the last one month. We expect fresh longs to be followed by recent accumulation in the stock

* The stock has seen one of the highest delivery based action around | 335 in the June series. Since then, it has remained in a narrow range and been immune to the market volatility. With early signs of the stock moving out of the prevailing range, we expect it to continue its upward momentum

* The 30 day HV for the stock is still high around 60% levels. With relative stability and ongoing accumulation, we expect volatility to decline, which should take the stock gradually higher

* Tata Steel has been finding it tough to move above its long term mean-1*sigma levels in last couple of months despite multiple attempts. However, it has finally moved above these levels placed around | 340. Sustainability above these levels is likely to take it towards its mean levels around | 440 in the coming weeks 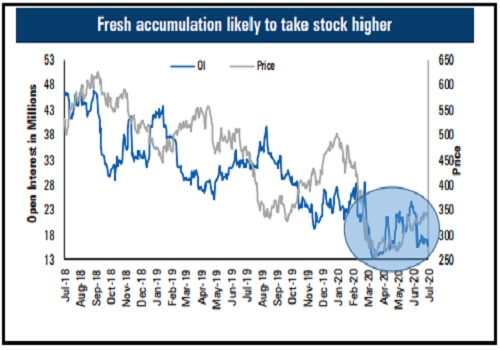