* In the current volatile market conditions, buying is more visible in the midcap space while the Nifty continues to consolidate around 11000. In the power segment, Torrent Power has significantly outperformed its peers in the last couple of years. It remained almost immune to selling pressure seen in the sector while the stock tested its highest levels since 2010 last month. We believe the recent declines in the stock are a buying opportunity as it is likely to move towards its life-time highs

* On the F&O front, the open interest in the stock has remained lower and it did not witness any major accumulation after the decline seen in February and March. The OI in the stock was close to 2 million shares in early March and the current OI is no different at current levels while stock has moved back to its highs. Considering continuous outperformance and resilience by the stock we expect fresh accumulation to be seen, which should take it higher in the coming sessions

* On the options front, the major Call base of the stock was placed at the 330 strike for August series followed by 400 strike. As the stock is already trading near | 330 levels, a further up move is likely to be seen in the coming sessions

* The stock has been testing | 300 levels for the last three years. After multiple attempts, it was able to move above it in May 2020 amid significant delivery based activity. We do not expect the stock to move below these levels once again

* Post the breakout in April, 2020 it has been just consolidating in the last three months above | 300. We believe the stock can start building up from these levels as there is ample room for long positions to be added in the stock

* Torrent Power was largely hovering between its long term mean and mean+2*sigma levels. However, with gradual buying, it is showing tendency of finding support near its mean+1*sigma. We expect it to move towards mean+3*sigma placed around | 390 in the coming weeks 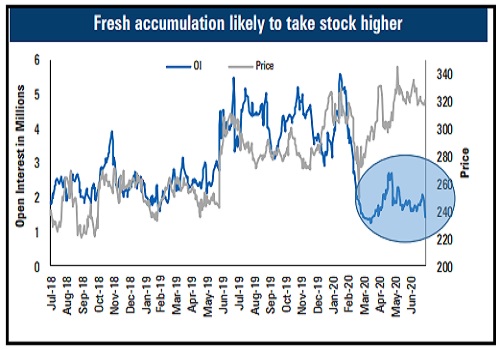