* Adani Port has been consolidating between | 310 and 360 for the last four months. However, this time almost fivemonth high delivery volumes were seen when it was recovering from lower support. We believe buying interest is increasing in the stock

* The open interest in Adani Port has declined significantly amid the resilience shown by the stock. The stock had made a high of | 366 in July 2020. After four months, it has again reached these levels. Factually, in the last couple of months, profit booking was seen repeatedly from | 360-365. However, since April 2020, shorts have been continuously reducing, indicating lower rollover of short positions. We believe fresh longs may be added in the stock if it sustains above | 360 levels for fresh upsides

* On the options front, the stock has the highest Call option base at the 370 strike followed by the 380 strike in the November series. As the stock was in consolidation phase, Call writers are active at ATM strike. Sustainability above the said level should trigger a further up move on the back of short covering in Call writer’s position

* Adani Ports saw highest ever volumes in May around | 300. In the last couple of months, noteworthy delivery volumes increased in the stock at | 330 and | 350 levels in May and October, respectively. Hence, immediate major support for the stock can be considered near | 340 levels. Moreover, In the initial part of the current series, it has already recovered from these levels. Hence, the stock is likely to continue its upward momentum

* Long term mean levels for the stock have stayed a major trend decider in the past. Since February 2020, the stock has been trading below these levels and despite multiple attempts has been unable to sustain above them. Currently long term mean for Adani Ports is at | 360. We expect positive bias to prevail in the stock above these levels 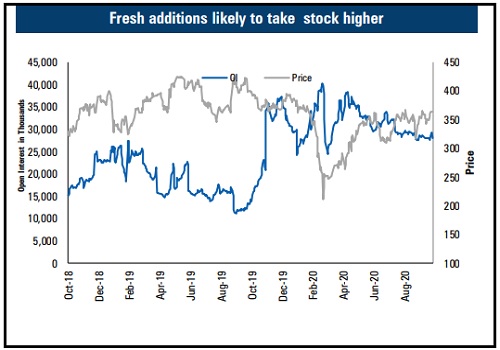