* Headquartered in Hyderabad, Granules India is one of the largest manufacturer of APIs like Ibuprofen, Metformin, Guaifenesin, Paracetamol and Methocarbamol for both the developed as well as emerging markets. Currently, it has eight manufacturing plants and presence in over 60 countries and has more than 250 customers. It operates in three verticals namely Active Pharmaceutical Ingredient (API), Pharmaceutical Formulation Intermediates (PFI) and Finished Dosage (FD). In terms of revenue, FD contributes 47%, API contributes 36% and PFI contributes 17%.

* The company’s financial performance has been healthy with Sales and PAT CAGR of 18% and 24% in the last three years. In Q2FY20 as well, the company has delivered strong results with Sales and PAT growth of 20.4% and 59% YoY. This was largely driven by new product launches and better pricing in its key markets. Recently, the company sold its 50% stake in Granules Omnichem JV to its JV partner as it was not yielding desired results for the company.

* Going forward, the company plans to expand its portfolio range with addition of differentiated and limited competition products in API/FPI. Therefore, with adequate capacity in place and expected approvals for its products from US FDA augurs well for the growth prospect of the company. Further, Granules has increased focus towards high margin products which bodes for improved margin profile in the coming years.

* Granules has had a prolong consolidation phase after listing which lasted for nearly seven years. It hovered in a range during that phase and formed a reversal pattern as well.

* It witnessed breakout from that range in the latter part of 2012 but the actual recovery started from mid-2013. It surged almost vertically from a single digit mark to 145+ levels in the next two and a half year. Such sharp move usually followed by a consolidation phase and it has been witnessing the same for the last four years.

* It has rebounded sharply in the last two months, after retesting the lower band of its consolidation range around 80 levels. Indications are in the favour of breakout from the prevailing range thus we advise accumulating within 122-126 with a close below stop loss of 105 for the target of 165. 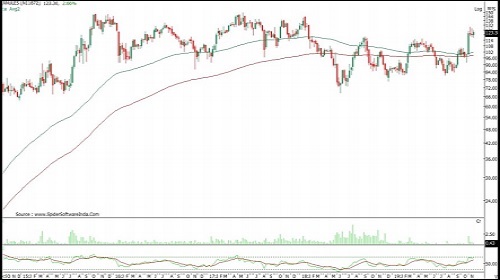