Derivatives Trading Idea Of 08 May 2020 by Motilal Oswal

Nifty witnessed rollover of 78.93% which is higher as compared to previous month rollover of 75.67% and quarterly average of 69.79%. Open interest of Nifty future increased by 13.17% on Series-on-Series basis, indicating long rollover in the index but on low base of Open interest. Nifty closed the June series with the decent gains of 8.42% while Bank Nifty relatively outperformed the benchmark index and ended the June series with gains of around 12.19%. Bank Nifty witnessed in line rollover at 80.60% vs last month rolls of 81.13% which is higher than quarterly average of 72.64%. Nifty starting the July series with open interest of 11.40 mn shares compared to 10.07 mn shares at the beginning of June series. Nifty started the June series with some long positions and started to move higher from first session of the series. It witnessed formation of long positions in early days of the series. In-between, we witnessed some selling pressure in the index, but that corrective move was not supported by fresh shorts. Again smart rally was seen in last one week with good amount of long positions. Eventually, Nifty concluded the June series with the handsome gains of around 800 points over its May expiry close. Market breadth also remained strongly in favour of advancing counters, which has a bullish implication for the market. Going forward, crucial support for Nifty is placed at 10250 zones while momentum could extend towards 10800 and 11200 levels.

IT: Long Built up in Mindtree; Short Covering in Wipro 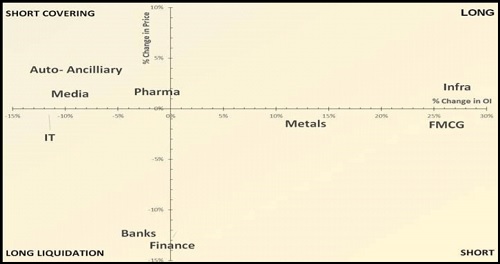 Derivatives Trading Idea Of 08 May 2020 by Motilal Oswal

Retail Sector Update - Whose flywheel is broken? By HDFC Securities

Pharmaceutical Sector - Q1 Preview: Down, but not out By Emkay Global

New-Generation Mahindra Thar: What We Know So Far