* Jeera September futures on NCDEX ended down on profit booking on Thursday. Rise in arrivals in the spot market weighed on as well.

* All spot markets in Rajasthan will be shut for a week from Tuesday in protest against the Centre's Ordinance on inter-state trade of farm produce. Kota, Baran and Ramganj are key coriander trading centres in the state.

* Coriander exports from India were up 3% on year at 50,250 tn in the last financial year according to the Spices Board.  Spices Board has forecast coriander production at 755,740 tn, up 25.9% on year due to a sharp rise in acreage. 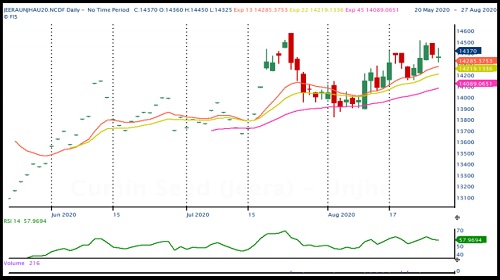 * Soybean output is estimated at 11.2 mln tn in 2019-20 against 12.2 mln tn the previous year, according to the farm ministry's fourth advance estimate. 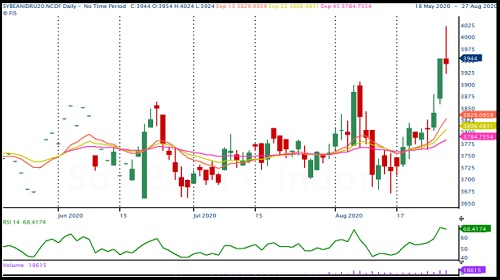 * Farmers have sown cotton across 12.8 mln ha in the 2020-21 (Jul-Jun) season, up 3.4% from a year ago, as of Thursday, farm ministry showed. Area under the crop is slightly higher than the normal of 12.2 mln ha for the period, based on the average for the last five years, data showed.

* The UK-based Cotton Outlook has scaled down its estimate for global output of the fibre in 2020-21 (AugJul) to 24.4 mln tn from 24.6 mln tn projected last month, the agency said in its July report. The fall in production estimate is primarily attributed to a smaller crop in the US and African Franc zone. Global cotton consumption in 2020-21 is pegged at 23.5 mln tn, marginally lower than 23.6 mln tn projected a month ago owing to changes for Brazil and the US.Ending stocks of the fibre for 2020-21 to 858,000 tn, against 998,000 tn projected last month. 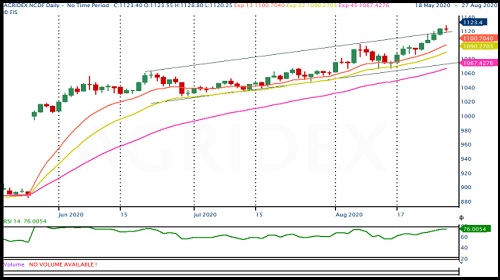 * According to the Rajasthan Agriculture Department, as of 18 Aug, guar has been sown across 2384700 hectares of land, up 79.5 per cent compared to the same period last year.

* Natural rubber in the Indian markets rose on Thursday on firm demand and supply crunch.

* The Association of Natural Rubber Producing Countries expects the global consumption of natural rubber to rise 2.6% on year in Aug-Oct on the back of stimulus measures the world over and improvement in economic activity in major consumers like the US and 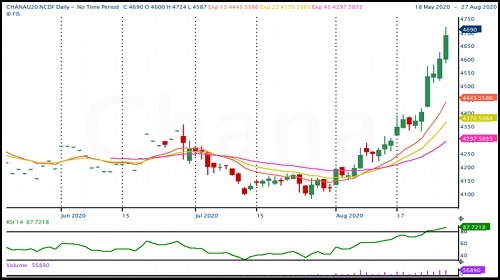