Summer hacks for your feet

Get Serious About Off-roading With The XPulse 200 Rally Kit

Surprisingly, the Rally Kit is now licensed for road use!

The kit was first showcased at EICMA 2019.
It turns the XPulse 200 into a rallying beast
It includes adjustable long travel suspension and Maxxis rally-spec tyres.

Hero’s Dakar rally adventures are finally starting to pay off for Indian off-road enthusiasts. Last year, it launched a capable off roader for the budding off roader in the form of the Hero XPulse 200. Hero also showcased the XPulse 200 Rally Kit at EICMA 2019 for those who were a bit more serious about their adventure riding. Finally, the kit has been launched in India at Rs 38,000. The kit will be available at select Hero dealerships across the country from March onwards.

Cautionary warning though, the rally kit is not homologated for road usage. It uses the standard XPulse 200 as the base and builds on its adventure character. You immediately get a sense of how serious an off roader it is as the entire motorcycle is raised mightily enough to wade over a small hill. This is done by kitting the bike with longer travel suspension units which are fully adjustable. At the front, you get 250mm of suspension travel while the rear end just gets 220mm. The standard bike has to make do with just 190mm and 170mm of travel respectively.

As a result, the ground clearance of the XPulse 200 has now gone up to 275mm! A sleek, flat bench seat raises the seat height further with handlebar-risers in place to offer a more attacking off-road riding posture. Obviously, you get a longer side stand so as to keep the bike from tipping over. Even a longer gear lever has been offered to accommodate thick off-road boots. Lastly, a pair of Maxxis knobbies completes the rally kit, making the XPulse 200 ready for some serious off-roading. 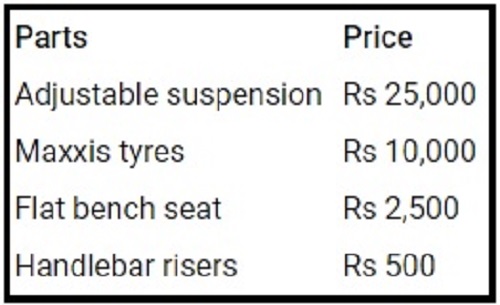 While the bike shown at EICMA 2019 was running an Akrapovic exhaust and a revised final drivetrain setup of 12/40T, these two are currently not part of the kit. Hero is developing an aftermarket exhaust but it will not be an Akrapovic unit, as it has to be cost friendly. By changing the final drive ratios of the XPulse 200, the Indian homologation laws would be violated. By fitting these two parts, the Rally Kit would render your XPulse illegal for road use.

Summer hacks for your feet

Unsold BS4 Hero Bikes Will Be Taken Back By The Company

Clash Of Segments: 2018 Maruti Ciaz vs Vitara Brezza - Which Car To Buy?

Colorful shoes for a vibrant you

Exclusive: Germany in talks to inject billions into Lufthansa - sources

COVID-19: WHO chief praises Modi`s efforts to help the poor