Analysts have never been more pleased after a Reliance Industries Ltd’s (RIL) annual general meeting (AGM) than this year. The singular focus on deleveraging the company’s balance sheet has brought immense relief for investors. Reliance shares soared 9% in early trading on Monday after the company said it aims to be debt-free by March 2021.

“What caught our eye, though, was its target to cut headline net debt (now Rs1.57 trillion) to zero by March 2021 implicitly acknowledging investor concerns on its balance sheet," said analysts from Jefferies India Pvt. Ltd in a report on 12 August.

RIL told analysts Saudi Aramco will acquire a 20% in its refining and petrochemicals businesses for roughly $15 billion.

Over the last one year, RIL has taken three big steps towards reducing its mammoth debt on the books. It has transferred its telecom unit, Reliance Jio Infocomm Ltd’s infrastructure assets off RIL’s balance sheet to an InvIT structure. “This potentially reduces liabilities by about Rs1 trillion," point out analysts from Centrum Broking Ltd in a report on 13 August.

Secondly, RIL will get ₹7,000 crore from BP for acquiring 49% stake in its petro-retail business. Thirdly, the Saudi Aramco deal will potentially reduce another Rs1 trillion from overall debt, said Centrum analysts. Combined, this reduces an estimated ₹2.1 trillion from RIL’s consolidated debt from September 2018 levels of ₹3.5 trillion (including ₹0.8 trillion of suppliers’ credit)," according to Centrum. Of course, the Aramco deal is subject to due diligence and the timeline of the receipt of funds may be staggered, some analysts say. 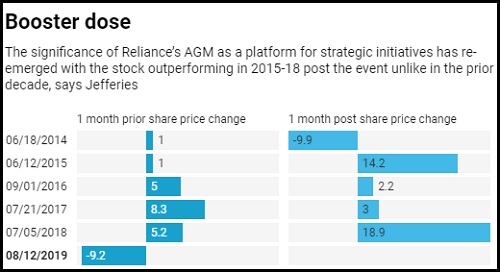 Even so, according to analysts from Emkay Global Financial Services Ltd, “The Aramco deal implies a ₹100 per share upside. The target of 15% 5-year Ebitda CAGR, zero net debt in 1.5 years, Jio/Retail listing in five years and higher dividend/buyback add to the positivity."

To be sure, these announcements come at a time when RIL’s increasing debt had cast its shadow on investors sentiment. In the past six months, Reliance shares had underperformed the Nifty by nearly 10%. Tuesday's 9% jump nearly wipes this out.