Mumbai: UltraTech Cement Ltd, India’s largest producer of the building material, has emerged as the front-runner to buy the cement business of Emami Group in an all-cash deal worth ₹6,500-7,000 crore, according to three people with direct knowledge of the discussions.

The sale of Emami Cement Ltd has entered the final binding bid round, with Ambuja Cements Ltd, part of the LafargeHolcim Group, as the only other contender, the people said on condition of anonymity. Ambuja’s offer is less than that of Aditya Birla Group-owned UltraTech, they said without disclosing the value of the bid. 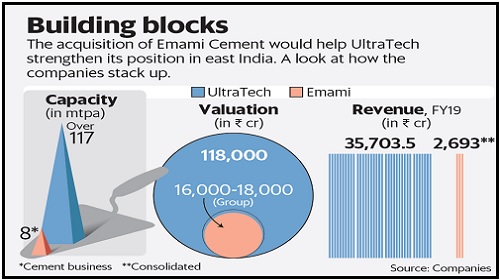 “UltraTech is most likely to win the bid, especially considering their keenness to expand in the east and the offer price made. The final binding bid round is likely to end next week," said one the two people.

The purchase of Emami Cement will help UltraTech make deeper inroads into eastern India and further consolidate its leadership of the domestic market.

“Both UltraTech and Ambuja’s offers are currently undergoing final due diligence by the banker and adviser. UltraTech intends to monopolize the market in the central-east, east and the far-east geography, where Emami owns most of its cement manufacturing units," said the second person cited earlier.

Kolkata-based Emami has hired Credit Suisse as the investment banker and Arpwood Capital as the deal adviser.

Credit Suisse and Arpwood declined to comment, while emailed queries to Emami, UltraTech and Ambuja did not elicit a response.

Emami Cement has a total capacity of around 8 million tonnes per annum (mtpa) across three operational cement plants in eastern and central India, while UltraTech has a capacity of over 117 mtpa.

(Graphic: Ahmed Raza Khan/Mint)
(Graphic: Ahmed Raza Khan/Mint)
“Given the concentration of Emami Cement’s business and its capacity, it may get a fair value of $105-110, which, along with a 10% premium for the eastern zone monopoly, could go up to a maximum of around $120 per tonne, which translates to a valuation of ₹6,800 -7,000 crore," said the third person cited earlier.

UltraTech has been acquiring cement assets over the past few years to enhance its reach in tier II and tier III locations. It has been particularly keen on the eastern zone.

On 21 October, the board of UltraTech approved the expansion of grinding capacities by 0.6mtpa each in Bihar and West Bengal and to open a grinding unit of 2.2mtpa in Odisha. Following this, UltraTech said it had plans to invest ₹940 crore to increase the production of premium products for strengthening its position in eastern India.

All plants will be commissioned by the first quarter of 2021.

UltraTech recently completed the acquisition of Century Textile’s cement business, with the scheme of demerger becoming effective from 1 October.

Emami Group has been looking to monetize its cement business, primarily to repay the group’s debts and reduce share pledges by promoters.

Apart from cement plants, Emami has mining leases in Chhattisgarh, Rajasthan and Andhra Pradesh. Some of Emami’s projects are under construction.

Emami’s key cement production units include a 2.5mtpa plant at Risda, Chhattisgarh, and another 2.5mtpa plant in Panagarh, West Bengal. Emami has a production unit in Odisha’s Jajpur district that is yet to be commissioned. The company is carrying out a brownfield expansion at its plant in Bhabua in Bihar to raise capacity to 3mtpa from 1.8mtpa now.

Emami Cement had a total debt of ₹2,246.76 crore as on 31 March 2018, consisting of ₹2,093.86 crore as secured term loan from banks and financial institutions and ₹152.90 crore working capital borrowings from banks.

In June, Emami Group promoters sold a 10% stake in Emami Ltd for ₹1,230 crore to reduce debt at the promoter level. Post the repayment, promoter pledge has fallen to around 37% in Emami, which had once shot up to over 50% due to a steady correction in the stock price. The debt was taken in their personal capacity to fund group firms.

Post the stake sale, the total promoter stake in Emami is 52.74%.

Emami Group had earlier planned to raise funds through an initial share sale of Emami Cement. It had even filed a draft prospectus in October 2018. However, that got delayed.