Narayana Hrudayalaya back on investors` radar as profitability is focus area

Hospital chain Narayana Hrudayalaya Ltd has been clocking double-digit growth since its listing in January 2016. But its shares have been under pressure since late 2016. Now, that the company has begun seeing a sustainable improvement in profitability, investors seem to be gradually returning to the stock.

The stock gained nearly 20% since the time Narayana Hrudayalaya announced its March quarter results. This was after profit margins expanded for the third consecutive quarter to 12.7%. Margins stood at 11.7% at the time of its listing on bourses in FY16, but then dropped to 10% in FY18 and further to 7.7% in Q1 FY19. It’s little wonder the stock was under pressure. 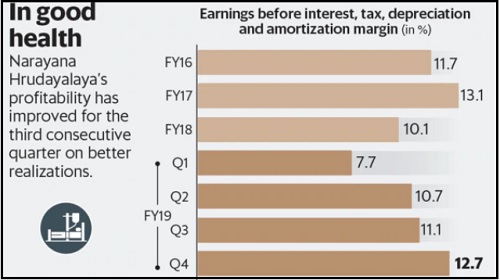 Note that even after the recent gains, the stock is still down 8.5% from the IPO (initial public offering) price.

Margins were hit earlier owing to capacity expansion, which drove up costs. But as a greater portion of the new capacities reached a stable state, realizations gathered pace. Growth in average revenue per occupied bed picked up from 5.3% in FY18 to 12.5% in FY19 at its mainstay India business. Realizations improved even as average length of patient stay at the company’s hospitals reduced, implying better patient and treatment mix.

The company aims to keep up the momentum. In its post- results interactions with analysts, the management said it is not targeting any major organic or inorganic expansion currently. The focus is on improvement in utilization levels at new and recently added facilities. This should aid profitability. “Focus on balance sheet and likely improvement in average realisation per operating bed by optimising case mix, we expect an improvement in return on capital employed from 6.3% to 14.1% in FY18-21E," ICICI Securities Ltd said in a note.

Even so, as Jefferies India Pvt. Ltd warns, it is crucial that Narayana Hrudayalaya keeps up the focus on execution. Three of the company’s new hospitals are still in investment phase and are losing money.

That said the growing coverage of health insurance and rising demand places Narayana Hrudayalaya and other hospital firms in a good position. At the same time, government regulations are increasingly capping prices of drugs and procedures. This can weigh on profit margins, especially for a chain such as Narayana Hrudayalaya, which puts more emphasis on low-cost operation and affordability.

“Management cautioned that margin cap by government could lead to impact on margins for some time," Jefferies India wrote in a note.