Cement producer ACC Ltd’s June quarter earnings were a mixed bag. A key positive was the improvement in operating margins, which was aided by higher realizations and softening input costs. As the alongside chart shows, Ebitda margins rose more than 200 basis points on a year-on-year basis in the June quarter. A basis point is 0.01%. Ebitda stands for earnings before interest, tax, depreciation and amortization.

It should be noted that a bunch of cement stocks including ACC rallied sharply following the price hikes announced in April-May. This indicates that the improvement in margins was already factored in by the Street. 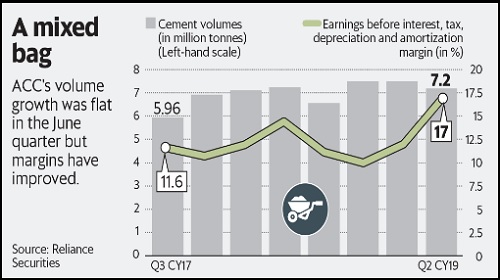 Realizations improved thanks to the steep price hikes announced in ACC’s key markets of south, central and east regions during the quarter. According to analysts, average realization stood at ₹5,210/tonne—an improvement of 8% year-on-year and 11% sequentially.

On the operating costs front, power and fuel expenses, and freight costs saw some increase annually. But the cost of raw materials consumed fell, mitigating the impact to a certain extent.

On the flip side, volumes were flat. In fact, given the company-specific capacity constraints, many analysts were anticipating sales volumes to decline. However, on a year-on-year basis, volumes were unchanged at 7.2 million tonnes.

Although the company has managed to maintain volumes, it is hardly a consolation for the Street, said analysts. That is because ACC is currently operating at optimum utilization levels and capacity-related challenges will take some more quarters to ease.

This nervousness comes in the backdrop of a subdued outlook, especially on the realizations front. Cement prices across India began to crack as a weak monsoon quarter approached. Weak demand growth along with capacity additions is likely to keep a lid on prices for the entire industry in the near term.

As for valuations, the ACC stock is trading at a one-year forward EV/Ebitda of around 11.65 times. EV stands for enterprise value. The stock trades at a discount to peers such as UltraTech Cement Ltd and Shree Cement Ltd, who have a pan-India presence.

Even though ACC’s valuation is relatively cheap, it still lags its competitors when one looks at the returns on a calendar year-to-date basis. This reflects the concerns investors have about its volume growth prospects.

In short, a trigger for rerating of valuations remains how soon the company completes its planned capacity expansion. Until then, analysts see limited upside in the ACC stock from the current levels.