Bharat Heavy Electricals Ltd’s (Bhel’s) focus on cost control and diversification into the industry segment is translating into better financial performance. While the firm reported a marginal increase in revenue of just 0.8% in the fourth quarter ended 31 March, net profit jumped 49% to ₹682.7 crore.

The company brought down its other expenses by 42%, which contributed substantially to its Ebitda (earnings before interest, tax, depreciation and amortization). Besides, the industry segment has a better margin profile than the power segment and hence an increase in Ebitda margin has been evident in the fourth quarter. Ebitda margin improved to 14.5% from 12.5% a year ago.

However, Bhel has not been able to improve its order book position in the last year. The company’s new order inflows in FY19 were just ₹23,900 crore, much lower than ₹40,900 crore in FY18. Owing to the general elections, a sizeable number of tenders and orders were postponed last year. As a result, orders outstanding in FY19 shrunk by nearly 8% year-on-year. 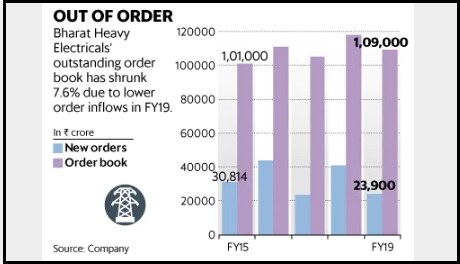 A pickup in order inflows is expected in the current year given that Bhel has won every EPC (engineering, procurement, construction) order for thermal power plants awarded in India in the past two years. This could see a bunching up of orders in FY20 and FY21.

“Because of deferment in order placement in FY19, the tender pipeline has expanded to 15GW, which would lead to bunching up of orders over the next two years. We are factoring in order inflow estimate of ₹400 bn (40,000 crore) each for FY20 and FY21," said Nirmal Bang Equities Pvt. Ltd in a note.

Bhel has also been looking to diversify into the industry segment to reduce its dependence on power projects and some of this is bearing fruit. It has received orders for 440km of track electrification, and the firm has also taken up several solar projects. This has seen the industry segment clock a faster growth of 13.9% in revenues than its power business, which shrank 2.5%.

But the Bhel stock has underperformed the Nifty 500 index in the past year. It declined 8.6% as compared to a 5.4% gain in the Nifty 500. A strong revival in the thermal power business is needed for analysts to rerate the firm.