NEW DELHI : When the National Democratic Alliance (NDA) government came to power in 2014, it focused on productive expenditure, making infrastructure creation central to its road map for economic growth.

It launched a slew of projects to build modern, smart cities, the SAUBHAGYA scheme aimed at 100% electrification of households, housing for all, and building airports in smaller towns and cities, among others. More funds were allocated for improving physical connectivity with a focus on rail and road.

Five years on, in its second term, the government’s thrust on building physical, as well as social infrastructure, has grown, at a time when the economy is in the middle of a deep downturn. According to the latest estimates, the Indian economy will grow at 5% in the current fiscal year ending March. The growth projected is slower than the 6.8% recorded in 2018-19. In the quarter ended September 2019, growth had hit a six-year-low at 4.5%, amid tepid demand and sluggish private investment.

The sustained focus on infrastructure creation underlines the government’s commitment to reviving the investment cycle and spur growth by increasing public spending in capital formation. 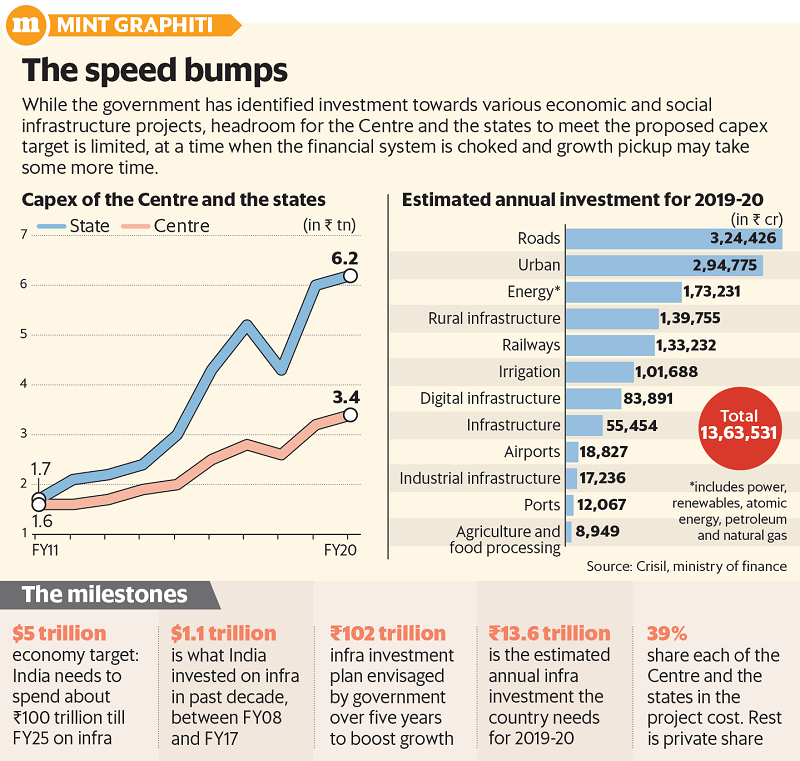 Finance minister Nirmala Sitharaman last month unveiled a plan to invest ₹102 trillion over five years in developing social and economic infrastructure. The projects will be implemented under the National Infrastructure Pipeline (NIP) mechanism. The announcement was in line with the government’s ambitious plan to make India a $5-trillion economy by 2024-25.

The greenfield and brownfield projects are across power, railways, urban development, irrigation, mobility, education, health, water and digital sectors across 18 states and Union territories. While the Centre and states will contribute 39% each of the project cost, the private sector will contribute 22%. In the next five years, the government also expects contributions from the private sector to increase to 30%. The lion’s share of investment will be in energy, roads, railways and urban infrastructure.

The announcement was in line with the economic survey released in July 2019, which called for higher flow of private capital into infrastructure, given the government’s fiscal constraints.

Experts said that while NIP is a great long-term plan, the first year component will be difficult to implement in the current financial year because of the burden on government revenues. For the current fiscal year, annual investment of ₹13.6 trillion has been estimated.

“In fact the whole idea of expenditure compression to treat fiscal deficit slippage in limit will either accentuate the compressionary trend or strengthen the downward momentum of GDP growth. In the first year, we are likely to miss the targets of the NIP, but from second year onwards, if the government can actively implement it, it can serve as an instrument for increasing investment, demand and thereby arresting the ongoing slowdown," said D.K. Srivastava, chief policy advisor, E&Y India.

“Expenditure compression should be focused only on reducing revenue expenditure. And, if investment by the government can be increased, or even if it goes beyond the budgeted estimates, it will improve investment demand and thereby provide demand stimulus," he said.

According to another expert, with state and local government agencies being perceived as more risky due to higher fiscal imbalances and institutional issues, the bigger challenge would be to attract private investment.

The road map for infrastructure creation has never been easy, and there are several immediate hurdles. One of the thorny issues before the government is the liquidity squeeze affecting non-banking finance companies. Failed projects in the past that led to a massive pile of distressed assets in the economy are another.

While highways, airports, fibre optics networks and gas transportation infrastructure have received steady investments, capital flows into oil and gas exploration and thermal power projects have been affected by factors like risks related to exploration of oil and gas, bottlenecks in value chain and challenges in power distribution.

Land acquisition has become a challenge for roads as well as the ambitious plan to build a high-speed rail corridor between Mumbai and Ahmedabad.