We expect the recovery to extend further and Nifty to retest 11,150 - Religare Securities

Nifty reclaimed 11,000 and settled with decent gains amid mixed cues. It reacted negatively to the news of roadblocks in GST reduction on the auto industry in early trades. However, firm global cues capped downside and bargain hunting in select index majors gradually pushed the index higher as the session progressed. Mostly sectoral indices, barring IT, participated in the move and the market breadth too was inclined on the advancing side.

In the absence of any major event, domestic macroeconomic data and global cues would dictate the market trend ahead. We expect the recovery to extend further and Nifty to retest 11,150. Traders should prefer private banks, auto and infra counters for long trades while defensive viz. pharma and FMCG may continue to trade lacklustre. 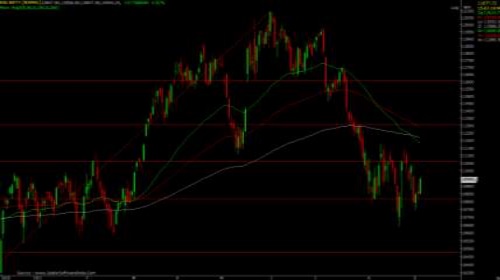 * Ashok Leyland announced 5-18 non-working days in September at 5 of its manufacturing plants. The move comes after the company reported declining sales volume for the fourth straight month in August with total sales declining by 47% YoY while domestic sales declined by nearly 50% YoY.

* L&T Construction bagged an order worth Rs 5,000-7,000cr from City and Industrial Development Corporation of Maharashtra Limited (CIDCO). The order is received for construction of 23,432 dwelling units with on-site infrastructure works at various locations in Navi Mumbai.

* SIAM reported August sales numbers for the domestic auto industry wherein slowdown was seen across segments. CV sales witnessed the steepest fall of 39% YoY followed by PV sales of 1,96,524 units down by 32% YoY and two wheeler sales which declined by 22% YoY.

We’re reiterating our long recommendation on ASIANPAINT with the updated levels as it was not initiated earlier in the given range.

BHARATFORG has retraced considerably from its record high and retested the crucial support zone up trending line on quarterly charts around 380 levels. Indications are in the favor of strong rebound in near future thus traders can accumulate fresh longs in the given range.

UPL added around 7% in open interest as long buildup was seen in it in previous session. Current chart pattern also indicates further up move in its price. We suggest buying UPL in cash as per below levels.