When investors didn’t like the answer to this question in September, the small-ticket housing financier’s stock plunged more than 42% in a single day.

The management took steps to alleviate concerns by stating their intent to repay every paper on maturity without fail. And, so far, DHFL has indeed repaid all maturing debt on the due date.

But the question continues to haunt investors even today, especially those who have put their faith and money in the company’s bonds.

While the bond markets had made adjustments long ago, rating agencies have finally noted the housing lender’s plight and DHFL has lost its crown of being AAA rated. Last week, CARE Ratings Ltd downgraded a bunch of bonds by DHFL to AA+ from AAA rating. Icra Ltd has put its ratings under negative watch. The rating agencies took note of the hit on profitability due to adverse market conditions.

“While a one notch rating downgrade in itself is not worrisome, there is a trust deficit among bond holders currently," said Ajay Manglunia, executive vice president at Edelweiss Financial Services Ltd.

DHFL’s borrowing costs had surged more than 100 basis points between April and November owing to this. Losing the AAA rating could add another 30-40 basis points to this rise, according to Manglunia.

“No one wants to touch DHFL papers now. Bonds are being quoted at a huge discount in the market, indicating that there are sellers and no buyers," said a bond trader at another non-banking financial company. A debt fund manager at a mutual fund also confirmed this.

While the DHFL management has accused the rating agency of arbitrarily downgrading its instruments, it’s clear that the rating agencies can’t be blamed. After all, the company’s loan disbursements fell a whopping 95% in the December quarter. Investors viewed DHFL as a growing lender and when the very growth has halted, why put money into it? 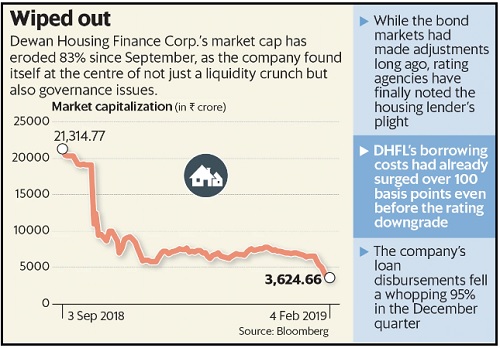 But the malaise in the company is deeper than the rating downgrades.

DHFL faces questions on its governance after an investigation by Cobrapost alleged siphoning of funds through shell companies, among other financial irregularities by the promoters. The management has sprung into action yet again to dispel fears, and categorically denied the allegations.

To its credit, DHFL and its holding company Wadhawan Global Capital, have taken steps to prevent default on repayments. DHFL has cash holdings of around ₹5,000 crore. It will get a net cash flow of over ₹500 crore from its stake sale in Aadhar Housing Finance Ltd and its asset management business, the management said in a conference call with investors.

DHFL may have done well so far to liquidate assets and repay maturing debt. But how long can it continue to service debt in this fashion is a question that has investors worried. As such, time is of essence and, unless banks are willing to uncork lending and bond investors turn friendly, DHFL may indeed default. Not because it had no money, but because circumstances made it difficult to raise enough of it.

RBI PCA banks: Queue to check out of Hotel California is slowly forming

Views On The F&O Expiry By Rahul Mishra

Views On The F&O Expiry By Chandan Taparia