HAL’s growth in FY19 was more than the 3.9% increase in revenue the company reported in FY18. Even so, as the chart alongside shows, its long-term growth rates pale in comparison to BEL. 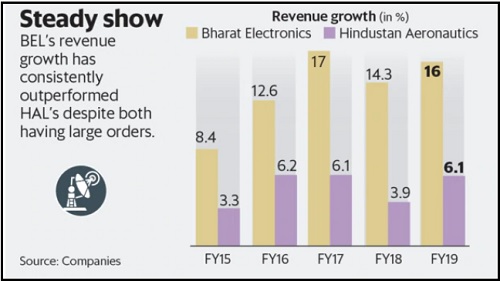 The outperformance, however, is yielding limited benefits for BEL. Recent gains notwithstanding, the BEL stock is down 33% in the last one year, not significantly better than the 36% fall in HAL shares.

What gives? To start with, HAL listed at a huge valuation discount to BEL last year, thereby limiting the damage during the market meltdown, points out an analyst who declined to be named. Besides, while BEL’s growth rates may be higher, there are concerns about its margins.

The government’s decision to limit margins for contracts given on nomination basis to public sector entities is expected to impact BEL’s margins. A large part of the company’s orders come via this route.

“We note potential margin pressure from higher share of system integration contracts in the coming years as opposed to core product supply orders, increasing share of competitively awarded projects in the defence sector, and standard defence products price list proposed by the ministry of defence," Kotak Institutional Equities said in a note last month on BEL.

Margin concerns aside, there are indications that BEL may maintain momentum on revenue growth. It booked orders worth ₹23,200 crore in FY19, taking its order backlog to ₹51,600 crore, which is about 4.4 times annual revenues. “We expect this momentum to sustain, given its healthy order pipeline consisting of QRSAM (quick reaction surface to air missile) orders, T-90 SM army tanks, night vision devices, and other base orders," Antique Stock Broking Ltd said in a note.

HAL did not give order inflow details, though past data suggests it too has a sizeable order book. However, subdued trend growth rates and poor earnings quality signifies that investor expectations are running low.

Low allocations for defence capital expenditure and budgetary constraints are driving up receivables at HAL. “Receivables at HAL likely rose to ₹20,000 crore by end-FY19, up from ₹7,700 crore from the previous fiscal year," points out the above-mentioned analyst. In FY17, receivables stood at ₹4,220 crore. The problem of receivables is pronounced at HAL as manufacturing of aircraft has a long gestation period.

Returns in the past year suggest investors are making no distinction between the two companies. However, BEL trades at 13 times trailing earnings, higher than HAL’s 10.7 times valuation. If investors get clarity on BEL’s margin trajectory, it may well start outperforming in terms of returns as well.

RBI PCA banks: Queue to check out of Hotel California is slowly forming