*  Indian rupee started strong amid weakness in dollar index . Rupee expected to trade with positive bias ahead of RBI minutes for rate cut cues. RBI on Aug. 7 cut its benchmark interest rate by an unconventional 35 basis points, its fourth reduction this year to support a slowing economy.

*  Indian rupee weakened for second consecutive session on Tuesday against the US dollar, due to rising crude oil prices along with stronger dollar.

*  Technically, USDINR August futures hold the support at 70.90 while resist around 72.14.

*  Asia’s emerging-market currencies advanced, led by South Korea’s won and Malaysia’s ringgit, as remarks from President Trump says he’s “not ready to make a deal with China,” but adds Beijing wants an agreement and something could happen soon. Trading was muted ahead of the Fed’s July meeting minutes and Jackson Hole symposium later in the week. A gauge of regional equities snapped a three-day rally, while government bonds were steady.

*  Yen weakens after rising for the first time in four days on Tuesday as investors brace for a number of risk events this week, including U.S.-Japan trade talks, FOMC minutes, U.S. jobs data and a speech by Federal Reserve Chair Powell.

*  U.K. Prime Minister Boris Johnson made his first public attempt to renegotiate the Brexit deal by telling the European Union he wants to explore different ways to prevent a hard border on the island of Ireland 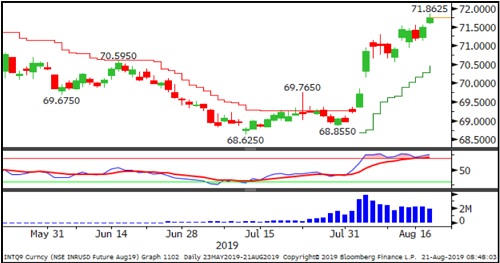 *  USDINR August futures have been consolidating between 70.90 to 71.56 since four days.