* In line with other Asian currencies, rupee expected to trade higher in today’s trade even after weaker than expected IIP and CPI data. The sound you hear is a bunch of risks being taken off the table in markets.

* Phase 1 trade deal agreed between US and China

* UK Conservatives appear to have majority

* Indian rupee gave away most of Thursday’s gain to close with a paise gain to 70.84 following central bank intervention to curb volatility.

* A close below 100-DMA support will set up for a test of the November low. Any initial test of 200-DMA at 70.29 should hold on first attempt given slow stochastic are so stretched.

* India’s bonds are poised to trade lower after a report late Thursday showed inflation accelerated to the fastest pace in more than three years. Consumer price index rose 5.54% in Nov. y/y versus 4.62% in Oct.

* There are some reports related to raising the investment limit for foreigners in government bonds to at least 10% of outstanding stock from the current 6%.

* The pound has enjoyed its biggest surge in a decade as the City cheered predictions of a strong Conservative majority that would finally end the Brexit deadlock. It leapt more than 3pc versus the dollar to hit $1.35, a 19-month high. 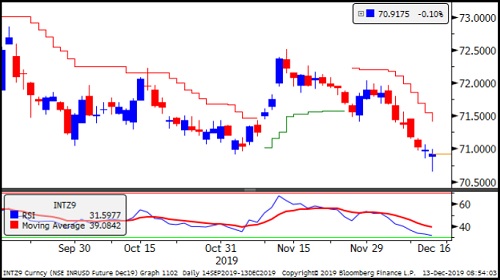