* India rupee fell for the second day in row on Wednesday amid foreign fund outflows and risk off sentiment after US China trade worries. Rupee expected to gains amid fall in crude oil prices. Dollar has been consolidating against major currencies ahead of the Fed Beige book later today.

* Spot USDINR edges higher toward the 69.41, 50 DMA since posting a bullish close above the upper bound of the downward channel. July low 68.29 now seen as a short term base.

* The Jalan committee has recommended that the transfer of the central bank’s surplus reserves be spread over three to five years.

* Govt. plan to increase the proportion of shares held by the public may boost foreign inflows and lift India’s weighting in MSCI EM index

* Indian sovereign bonds likely to gain on a drop in crude oil and US treasury yields. WTI crude oil fell for a fourth day after official data showed decline consumption of gasoline and diesel than expected last week. The world’s mounting stock of negative yielding debt is drawing foreigners to Indian bonds. Yields on benchmark 10 year bonds rose 1bp to 6.34% on Wednesday.

* The dollar slipped from the highest level of the past week as traders remained focused on trade conflicts and the possibility of Federal Reserve rate cuts. Pound briefly hit the lowest level since 2017 and then rebounded after the U.K.’s House of Lords supported a move that would make a no-deal Brexit harder. 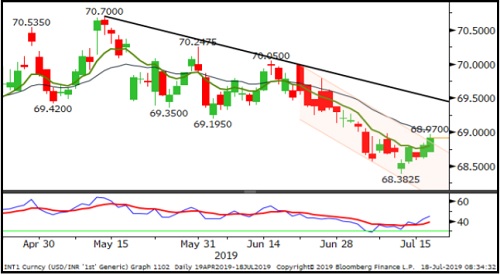 The pair is having resistance at 69.45. It has been trading above short term moving averages.

Tripura SEZ along Bangladesh to be multi-sector one