* Dhaniya futures on NCDEX declined more than two per cent to end Thursday’s session in red. Amidst tepid demand, expectations of better crop this season despite lower acreage in Rajasthan and Madhya Pradesh on favourable weather weighed on .

* Coriander acreage in Gujarat, the second-largest producer, was at 87659 ha as of 13 Jan compared with 29630 ha in the corresponding period last year, data from the state farm department showed.

* The broad underlying sentiments stayed weak in Turmeric futures on NCDEX. Arrivals are expected to rise in coming days and along with expectation of higher production in 2019 kharif season may weigh on overall market sentiments.

* Turmeric exports from India rose one per cent to 67500 during the Apr-Sep period according to the data released by the Spices Board.

* The MCX has delivered 1.5 tn of cardamom under the January contract that expired on Jan 14, exchange data showed.

* Cardamom exports from India slumped 72 per cent to 405 tonnes for the period AprSep according to the data released by the Spices Board. 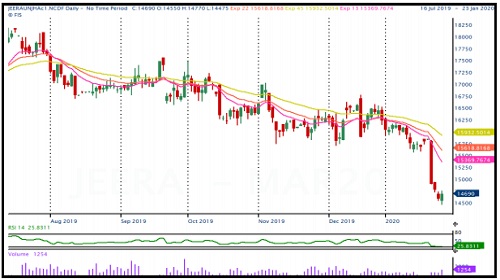 * NCDEX Feb soybean extended its weakness in sync with U.S CBOT soybean prices as expectation of higher output in U.S and Brazil weighed on sentiments. Moreover, Feb Mustard seed also fell due to expectation of higher acreage amidst conducive weather conditions likely to increase the output.

* The government has slashed duties on import of crude and refined palm oils from Association of Southeast Asian Nations, as per a notification by the Central Board of Indirect Taxes & Customs.

* India's soymeal exports fell around 85% on year to 60,000 tn in December, according to The Soybean Processors' Association of India data.

* Farmers across the country have sown mustard across 6.9 mln ha as of Thursday, down 0.4% on year, farm ministry data showed. Acreage under the spice declined because farmers opted to grow wheat and pulses rather than mustard, farm scientists said. In Madhya Pradesh and Uttar Pradesh, farmers grew wheat due to better returns. A likely rise in area of mustard under other key states is expected to lift acreage in the coming days, traders said.

* For 2019-20 (Jul-Jun), India's castor seed output is expected to rise 42.9% on year to 1.7 mln tn on the back of adequate rainfall in key growing areas, according to farm ministry data. Higher acreage and conducive weather conditions this year led to higher yield and a resultant production.

* India's castor oil exports fell 19.5% on year to 32,422 tn in December, according to Solvent Extractors' Association of India data. The sharp fall in exports was primarily due to subdued demand from traditional buyers, primarily China, an association official said. For Apr-Dec, exports of the commodity were at 397,813 tn, compared with 431,457 tn during the year-ago period. In 2018-19 (Apr-Mar), India's castor oil exports slipped to 571,985 tn from 651,326 tn in the previous year, the SEA said.

* Malaysia’s crude palm oil output fell around 13.3% on month to 1.3 mlntn in December, according to the Malaysia Palm Oil Board data released. Inventory of processed palm oil in the country was at 987,579 tn in December against 1.1 mln tn a month ago. Palm oil stock in December was at 2.0 mln tn, down 11% on month. Malaysia is the world’s second largest producer and exporter of palm oil, after Indonesia,& while India is the world’s top buyer. Malaysia’s crude palm oil exports in December fell 19% on month to 274,10 while biodiesel exports were at 44,904 compared with 44,153 tn in November, the data showed.

* Malaysia's palm oil exports in the Jan 1-20 period are estimated to be nearly 10% lower from the corresponding period a year ago at 738,902 tn, cargo surveyor AmSpec Agri Malaysia data. 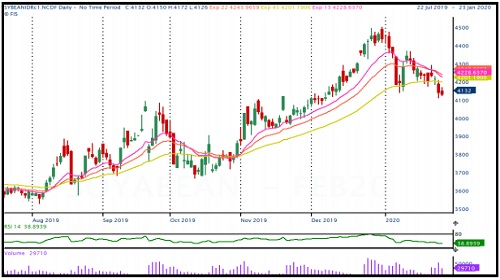 * Cotton production in Gujarat is likely to rise 39% on year to 8.7 mln bales (1 bale = 170 kg) in 2019- 20 due to a sharp rise in yields, according to the second advance estimate released by the state's farm department. Cotton yield is seen rising to 554.9 kg per ha from 401.3 kg last year due to above-normal rainfall in key growing regions.

* The Cotton Association of India has maintained its estimate for cotton production for the 2019-20 (Oct-Sep) season at 35.45 mln bales (1 bale = 170 kg), up 13.6% on year. The association also retained its estimate of 4.2 mln bales for cotton exports, and pegged imports at 2.5 mln bales. Domestic consumption of cotton is projected at 33.1 mln bales, unchanged from the previous month. For the 2019-20 season, closing stock of cotton is pegged at 3.0 mln bales. Arrivals of cotton have been estimated at 12.6 mln bales till December. The supply of cotton has risen sharply compared to previous month due to peak arrivals season.

* The International Cotton Advisory Committee expects global prices of cotton to come under pressure due to higher ending stock in 2019-20 (Aug-Jul) as production has risen and demand outlook is weak, the committee said in its December report. The agency expects global cotton production to increase nearly 3% on year to 26.4 mln tn in the ongoing season. Global supply of cotton in 2019-20 is projected at 44.63 mln tn, compared with 44.38 mln tn a year ago. It has estimated its global cotton consumption at 26.2 mln tn, while ending stock for the season is seen at 18.44 mln tn, higher than 18.22 mln tn projected last year. Global exports of cotton are seen falling to 8.96 mln tn in the ongoing season, compared with 9.24 mln tn projected in the previous year.

* The US Department of Agriculture's Foreign Agricultural Service has cut its estimate for India's 2019 -20 (Aug-Jul) cotton production at 37.6 mln bales (1 bale = 170 kg), from 38.1 mln bales projected in December. Opening stock of cotton in India is estimated at 11.7 mln bales, and consumption by mills is expected to be steady at 31.5 mln bales. India's import and export estimate is seen steady at 2.6 mln bales and 5.1 mln bales, respectively. For 2019-20, the agency has revised the estimate for closing stocks to 15.1 mln bales from 16.7 mln bales projected in December.

* India's cotton exports have slowed down in the current marketing year that began on Oct 1 due to higher domestic prices following a hike in the minimum support price and in view of the depressed global prices. The ongoing procurement by state-owned Cotton Corp of India lifted the price floor to around 38,500 rupees a candy (1 candy = 356 kg) or 74 cents a pound, while global prices are hovering around 72 cents, making exports largely unviable barring some grades of cotton. So far only 600,000-700,000 bales (1 bale = 170 kg) have been shipped out, and the total export contracts are yet to hit the 1-mln-bale mark. The number is just about 50-60% of the normal export contracts this time than in the past few years 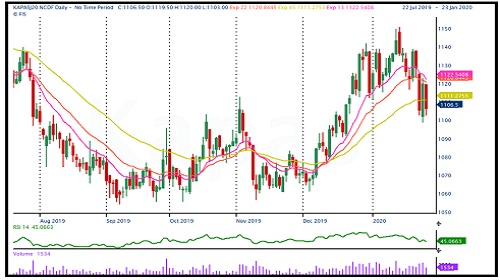 * On Thursday, short-covering moves were witnessed in Chana futures on NCDEX from the four month lows hit the previous day.

* The Securities and Exchange Board of India is delaying the approval for futures contracts in tur and urad as the government is not in favour of these, said a government official adding that the government is asking the regulator to discontinue even chana from futures trade. However, SEBI is not in favour of discontinuing the chana as the country is staring at another bumper crop, perhaps a record crop of around 12 mln tn.

* As per recent Apeda report, India shipped total 2.40 lakh tonnes of guar gum during April to October 2019-20 with price value Rs. 2066 crore which is lower from 2.98 lakh tonnes in 2018-19 in the corresponding period of time after less exports demand.

* India's natural rubber import fell 16.8% on month to 36,907 tn in November, according to Directorate General of Commercial Intelligence and Statistics data. 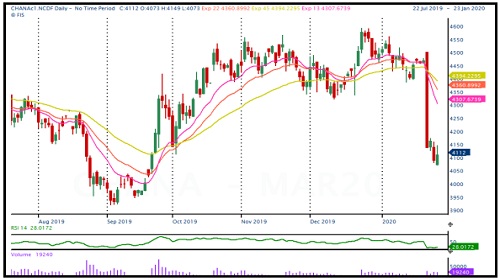