* Coriander futures were held in thin ranges on Friday. The active Septmeber futures on NCDEX were seen varying in narrow ranges near its lowest level since October 2018. Subdued demand weighed on.

* Turmeric futures bounced back on Friday, with the most active September futures gained more than two per cent.

* In Maharashtra and Karnataka, Turmeric growing regions like Sangli and Belgaum excess rainfall reported. As per initial information, Turmeric standing crop report-ed damaged due to submerged of turmeric field. However, actual damage percent-age likely to come after one week. Earlier (before rainfall) in Sangli re-gions Turmeric sowing area (from normal) reported down by 10 – 15% due to defi-cient rainfall. Other parts of Maharashtra, Turmeric growing regions like Basmat, Nanded standing crop reported well.

* Rise in arrivals put downwards pressure on cardamom on Friday. On MCX, the near-month September futures slipped four per cent. 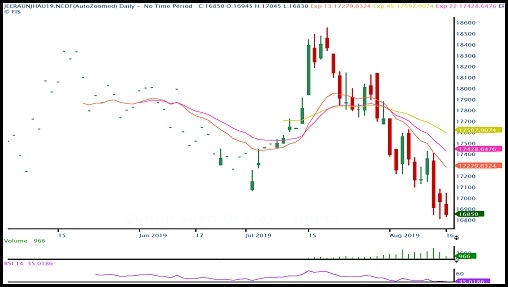 * All components in the edible oil complex fell on Friday.

* Most active Sep contract of soybean on NCDEX settled down on expectation of rise in acreage which will increase yield as the weather is conducive for growth of standing crop.

* Farmers have sown soybean over 11.15 mln ha, up from 11.10 mln ha a year ago, according to Agriculture ministry.

* The September mustard contract on the NCDEX also traded lower due to increase in kharif oilseed crop along with tepid demand from oil millers. However, major fall was arrested by increase in mustard crush-ing.

* Mills in India crushed 525,000 tn of mustard seed in July, over 16.7% higher on year, according to data compiled by the Mustard Oil Producers Association of India.

* The National Agricultural Cooperative Marketing Federation of India has offered to sell 26,454.04 tn of mustard seed through NCDEX e-Markets, according to its tender notice.

* Palm oil exports from Malaysia rose 7.4% on month in July, and stocks for the same period fell 0.8%, according to the Malaysia Palm Oil Board. 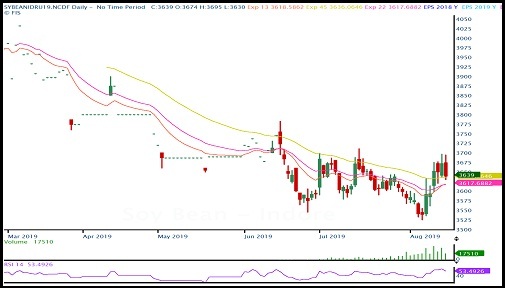 * Good rainfall in India's cotton growing states has led to increased sowing, with acreage rising 5.4% on year to 11.87 mln ha as of last week.

* The report also forecast that overall cotton imports to Vietnam may dip further in August.The US Department of Agriculture has further cut its forecast for average global cotton prices in 2019-20 (Aug-Jul) by 3 cents from previous month to 60 cents per pound noting lower demand from major consuming countries, which may lead to increase in ending stocks for the year.

* The Chinese government has sold around 224,000 tn of cotton from its state reserves during May 5-Jun 6 against 262,800 tn offered at the auction. This year, the daily sale quota has been set around 10,000 tn compared with the previous two years' 30,000 tn because the total stock fell to 2.5 mln tn ahead of the auctions, compared with 7.0 mln tn a few years ago. In 2018, the country had sold around 2.5 mln tn cotton from its reserves. The Asian giant has been drawing down its massive cotton reserves built over the past three years.

* Cotton Outlook has maintained its estimate for India's 2019-20 (Aug-Jul) production at 6.13 mln tn, which would be 7% higher on year, the agency said in its monthly report.

* Global consumption is forecast at 123.07 mln bales, down from its July projection of 124.27 mln bales, leading to rise in global ending stock at 82.42 mln bales compared with 80.42 mln bales estimated a month ago. Higher inventories are also attributed to 500,000-bale rise in beginning stock for 2019-20 due to lower consumption in the previous year in India, China and Uzbekistan, USDA said.

* USDA has retained its crop forecast for India at 29.0 mln bales, but cut its forecast for exports from India in 2019-20 to 4.2 mln bales from 4.4 mln bales estimated a month ago. Estimate for imports 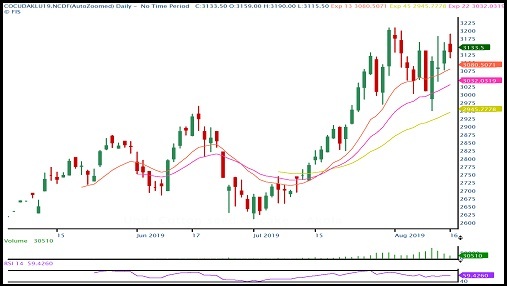 * Due to rough weather condition and disease in Canada & parts of US chickpeas growing belts concerns have started surfacing regarding yield potential. Fear have been ex-pressed over quality too. Chickpeas crop is suffering from aschochyta blight. It reduce yield and hamper quality too. If it is not contained in its early stages ,yield loss might be 60 to 70 percent this year.

* At chickpeas front farmers in Canada has covered 1.35 lakh ha area under chickpeas. At 1.73 MT yield per ha2.30lakh MT production has been pegged this year. The season started with 1.85 lakh MT carrying and with 18000 MT likely import total supply is ex-pected to be around4.33lakh MT this year. At 1lakh MT estimated export carry out would increase from1.85 to 2.60lakh MT this year.

* India's Apr-Jun guar gum exports fell 5.5% on year to 127,700 tn, according to Agricul-tural and Processed Food Products Export Development Authority data. A sharp decline in demand from the American oil & gas industry amid a slowdown in drilling of shale oil may have impacted the exports. Guar gum is used largely as a sealant in fracking at shale oil facilities.

* As per latest update, area sown under guar seed in Rajasthan until 08th August 2019 is 2424.20 thousand hectares compared to of 2806.9 thousand hectares for 2018 Kharif season. Area of guar is expected to be slightly lower this season as farmers are shifting to more remunerative crops. Lower sowing and rainfall compared to last year are sup-porting guar prices.

* According to latest update, area sown under guar seed in Gujarat until 05th August 2019 is 66718 hectares compared to 86338 hectares in the previous Kharif season. Area of guar is expected to be lower this season as farmers are shifting to more remunera-tive crops as it is fetching more returns. The last three year average normal area for guar seed in Gujarat is 186650 hectares. 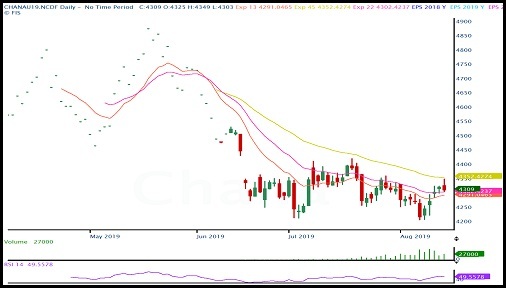