The market rally, fuelled by Thursday's record U.S. jobs numbers, largely blew itself out after a record daily total of new U.S. COVID-19 cases, though news of the fastest expansion in China's services sector in over a decade kept Asia's tail up early in the day.

Chinese shares had charged to their highest level in five years, helping the pan-Asian indexes to four-month peaks, so the sight of European markets stalling left traders floundering, especially with no Wall Street to pick things up again because of a U.S. market holiday.

Currency and commodity markets were also subdued after an otherwise strong week for confidence-sensitive stalwarts such oil, copper, sterling and the Australian dollar, which all struggled on Friday.

More than three dozen U.S. states are now seeing increases in COVID-19 cases, including Florida, where they have leapt above 10,000 a day. And while Europe is largely easing restrictions, some places are having to keep them or reimpose them again.

"I think infection rates and fears of localised lockdowns have doused some of the enthusiasm," said Societe Generale strategist Kit Jukes.

"We have three elements now; vaccine hopes, decent data in most places - but also the return of infection rates, which can make you nervous."

London, Paris and Frankfurt's stock markets were down 1.2%, 0.4% and 0.8% respectively as trading began to wind down, although all were up for the week. The euro and pound were also fractionally lower, though it was barely noticeable thanks to the dollar's second dip of the week.

The euro was at $1.1226 and though it gained against the safe Swiss franc it fell versus the red-hot Norwegian crown, which has been on the rise for months, in tandem with most petrocurrencies.

S&P 500 futures were down 0.2% but volumes were low due to the U.S. market holiday for Independence Day.

The previous day's U.S. non-farm payrolls had shown a well-above-forecast 4.8 million surge in jobs in June. It came largely thanks to rises in the hard-hit hospitality sectors, though economists did note some caveats.

The number of permanent job losses continued to rise, increasing by 588,000 to 2.9 million, while the unemployment rate remains a chunky 7.6 percentage points above its February level. A Deutsche Bank analysis put the U.S. unemployment rate behind all its developed market peers, barring Canada. 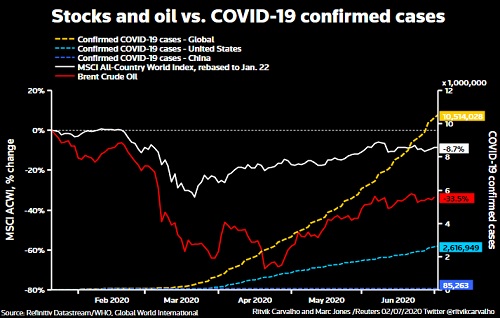 WILL THE BEARS BITE BACK?

The recovery faces headwinds as the surge of new coronavirus infections prompts U.S. states to delay and in some cases reverse plans to let stores and restaurants reopen and activities resume.

BofA said in a report on Friday that $7.1 billion had been was pulled out of equity funds over the last week, and its closely-followed 'Bull & Bear' indicator was out of "buy" territory for the first time since March 17.

Nevertheless, investors seem to have been largely overlooking the various virus spikes for now at least, and taking the view that things are still improving globally.

A market fear gauge, the VIX volatility index, has seen its biggest drop in two months and German government bond yields were set for their biggest weekly rise in a month, though they nudged down on Friday to -0.44%.

Riskier Italian yields fell to 1.26% as well though, which is their lowest since late March, at the peak of Europe's coronavirus lockdown.

Copper prices were poised for a seventh consecutive weekly gain, their longest winning streak in nearly three years, though it too was slightly down on the day at $6,040 a tonne, more than $1,500 up from lows it plumbed in March.

"The one issue that hangs over all the markets is 'Will we see a surge in secondary infections that will trigger a second wave of national rather than regional shutdowns?'," Malcolm Freeman, director of Kingdom Futures, wrote in a note. 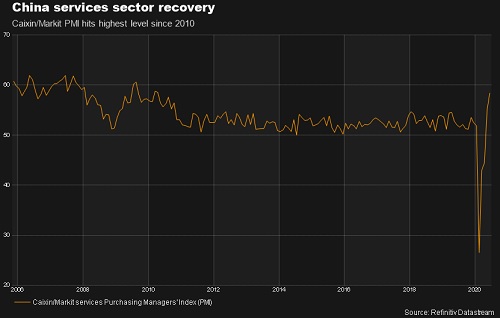 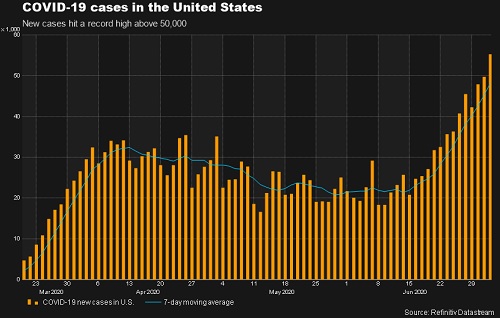 ALERT: One virus has turned the world upside down: Narendra Modi

With an additional 5% health cess in play, patients to take the hit

Grace period for life insurance policies extended till May 31

Update The yield on the benchmark 10 year Treasury yield rose to 0.549% - GEPL Capital