Pressure on Airtel, other telcos could partly ease: Fitch Ratings

Why investors are taking a $4.8 bn blow to Bharti Airtel in their stride

Airtel hits new high on duopoly hopes, but investors should note the risks too

With the Supreme Court dismissing the review petition filed by telcos against the adjusted gross revenue (AGR) ruling, investors have begun pricing in an effective duopoly in the industry. Shares of Vodafone Idea Ltd fell by 25% on Friday to ₹4.50 apiece. “The company has no source of cash to pay the liabilities and was entirely dependent on payment relief. It has cash merely to continue operations for the next two-three quarters," analysts at Motilal Oswal Financial Services Ltd said in a note to clients.

Shares of Bharti Airtel Ltd, meanwhile, touched a 52-week high on Friday. The stock has gained by about 39% since the Supreme Court ruling on AGR dues in end-October. This is despite the fact that it is also liable to pay the government as much as ₹34,300 crore on account of the SC judgement. The company recently raised $3 billion, which can be used to pay the AGR dues. Besides, investors are pricing in market share gains as a result of Vodafone Idea’s exit. The latter said its dues to the government stand at ₹44,200 crore. 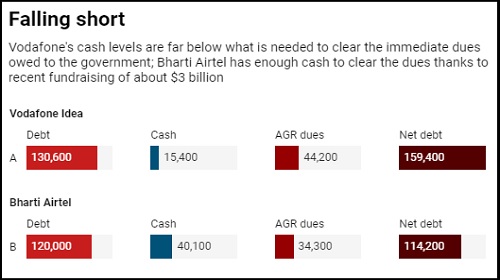 The telecom companies have the option of filing a curative petition, but not many analysts are holding much hope in that. “Telcos can still file a curative petition. This though it is done only to cure gross miscarriage of justice and we see a very low chance of success," said analysts at Jefferies India Pvt. Ltd.

Some analysts, though, expect the government to provide relief in terms of a moratorium on the payment. This should cap the immediate cash outgo for Vodafone Idea, and give it a lifeline.

Still, with insurmountable liabilities and promoters unwilling to pump in fresh equity, analysts fear the firm may fall far behind competition. “Even with the reliefs, AGR dues are a drag and will affect operations. The price increases are positive, but given high leverage, we expect its 4G rollout to be lower than peers, with Vodafone Idea losing market share," added Jefferies India’s analysts.

A collapse of Vodafone Idea will also erode Bharti Airtel’s value in its subsidiary Bharti Infratel Ltd, for whom both telcos are large customers. Bharti Infratel contributes about 8% to the fair value ascribed to Bharti Airtel, according to analysts at SBICAP Securities Ltd.

Further, gaining from Vodafone Idea’s problems will not be easy for Bharti Airtel. “Hypothetically, if we assume that Bharti adds 40% of Voda-Idea’s subscriber base, our analysis suggests that Bharti may need to at least invest $5 billion in spectrum to accommodate new subscribers," said SBICAP Securities’ analysts.

Pressure on Airtel, other telcos could partly ease: Fitch Ratings

Why investors are taking a $4.8 bn blow to Bharti Airtel in their stride

Bob Odenkirk's 'Nobody' pushed to February 2021