How concentrated is your mutual fund scheme?

Making Money should never be so easy!

In a possible re-run of the DHFL episode, large open-ended debt schemes of Aditya Birla Sun Life Asset Management Co. (ABSL AMC) have witnessed a sharp increase in their percentage exposure to the Essel Group paper, leaving investors exposed to large losses in case of a default. In case of DHFL Pramerica Mutual Fund, exposures of 7.5-8.5% to DHFL in mid-2018 exploded to 30-53% in May 2019 due to large outflows from the affected schemes as investors fled before the defaults happened and the fund house had to sell the more liquid part of the portfolio to meet the redemptions. As a result, the remaining investors in the schemes suffered a big hit when DHFL defaulted. On 5 June, DHFL Pramerica Medium Term Fund had to write down 53% of its value, which was unheard of in the mutual fund space. Similar outflows from three ABSL AMC schemes—Aditya Birla Sun Life Medium Term Fund, Aditya Birla Sun Life Credit Risk Fund and Aditya Birla Sun Life Dynamic Bond Fund—have pushed up their exposure to the troubled Essel Group. This could well lead to a similar outcome. 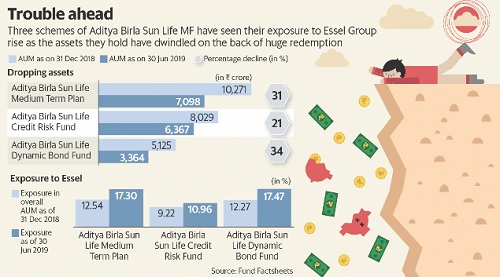 In January 2019, a consortium of lenders to the Essel Group, including mutual funds, agreed to wait till 30 September, giving it time to raise money for repayment of loans. The lenders agreed not to enforce their collaterals against Essel Group debt; for several mutual funds, these collaterals are shares of the promoter in Essel Group companies, including Zee Entertainment Enterprises Ltd. Mutual Funds have an exposure of about ₹7,000 crore to the Essel Group debt, as of end of February 2019, as per data from Value Research. Some AMCs, including Reliance Nippon Life Asset Management Co., have exited since. But the Essel promoters haven’t managed to raise sufficient money to repay lenders in seven months, and with just about two months left to go, the lenders find themselves on the edge now.

However, a person with knowledge of the matter who is close to ABSL AMC, said that the promoter stake sale in Essel is ongoing and is being closely monitored by lenders. He expressed full confidence that the stake sale will be completed before the deadline of 30 September. He added that promoter debt is only 0.8 times the value of the promoter stake in Essel Group and, hence, all creditors can be fully paid off. ABSL AMC refused to go on record on the issue.

Overall, mutual fund exposure in Essel Group is partly in fixed maturity plans (FMPs) and partly in open-ended funds. FMP investors can’t exit the schemes because of mandatory lock-ins. However, the inability to exit has kept the percentage exposure to the troubled debt constant in FMPs.

In open-ended funds, investors have the option to exit and many have exercised that in the three affected ABSL schemes. As the fund managers concerned sold other securities to meet redemption, the size of Essel debt in their portfolios ballooned. Exposures of 8-12% in December 2018 have escalated to 12-17%, placing current investors at risk.

The ABSL schemes are exposed to two Essel Group companies—Spirit Infrapower and Multiventures Pvt. Ltd and Adlink Infra and Multritrading Pvt. Ltd. Papers issued by Spirit are rated BBB by Brickwork Ratings and Adlik papers are unrated. The rating of the Spirit paper was Brickwork A (SO) in December 2018, and was downgraded one notch to Brickwork BBB (SO) in May 2019. ABSL schemes are only rated by Brickwork, as per the AMC’s monthly portfolio disclosure. In total, the value at which the ABSL schemes have marked the two papers has not changed much since December 2018. The value adds up to ₹2,513 crore at the end of June 2019, which is just around 5% less than their combined value of ₹2,657 crore in December 2018.

The person mentioned earlier said that only a write-down of 10-15% of the papers has been considered. Further outflows from the three schemes can lead to an increase in their exposure to the troubled paper. He also indicated that the security cover (value of securities) is still about 1.2 times the exposure to Essel, despite the decline in the Zee Entertainment stock price, which fell 29% over the past year.

However, mutual funds, including ABSL AMC, which are signatories to the consortium, face a dilemma—exiting the Essel Group by selling pledged shares in Zee Entertainment will cut their risk, but a simultaneous exit by all lenders will cause the stock price to fall far below the value of the debt held by lenders. “Even if the promoter manages to repay lenders, the papers might get marked down in the interim due to Sebi’s disapproval of the standstill agreement," said Vishal Dhawan, founder, Plan Ahead Wealth Advisors.

What should you do?

Various persons with knowledge of the matter expressed confidence that the debt will be repaid by Essel promoter’s stake sale. If the money is repaid in full, investors could be looking at an upside of 10-15% in the troubled paper. What does this translate into? With the Essel papers constituting 17% of scheme assets in case of Aditya Birla Sun Life Medium Term Fund, the upside would be around 2.5% at best. Similar outcomes are likely in the case of the other two schemes. The person with knowledge of the matter mentioned that in addition a percentage of the profit earned by the promoter on the stake sale will accrue to lenders in the form of coupon. However, it is unclear how much this additional amount will be. On the other hand, investors could lose up to 11-17% in the affected schemes. If they stay put and the percentage exposure to Essel rises, the loss may go up.

Looking at the numbers, it makes sense to exit. “We had recommended an exit in a note to investors six months ago," said Prateek Pant, co-founder and head products at Sanctum Wealth Management. “The exposures have gotten worse since then due to large-scale redemptions and there has been hardly any write-off so far. Investors who stay put in the affected schemes are taking a big event risk," he said.

Before exiting, “consider the tax and exit load," Dhawan said. Debt funds are taxed at slab rate if held for less than three years and at 20% with indexation if held for longer.

How concentrated is your mutual fund scheme?

Making Money should never be so easy!