“We must care for each other more, and tax each other less," said the American lawyer and politician Bill Archer. India’s corporate sector is certainly feeling loved and cared for, with the government slashing the effective corporate tax rate from 34.94% to 25.17%. That effectively means a 15% boost to post-tax corporate earnings, which will help companies increase investments and/or payouts to shareholders. 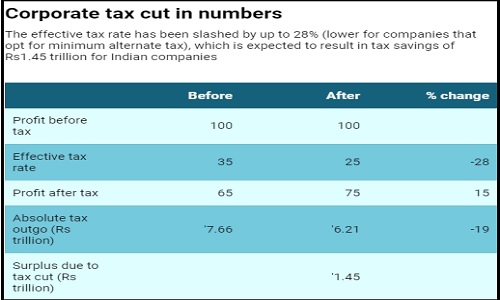 While the government was criticised by some market participants for inaction while presenting the budget for the year on 5 July, this one move to cut tax rates has more or less erased those memories. “This is not bigger than budget, this is bigger than last 20 budgets," said Singapore-based fund manager Samir Arora.

The government quantified the largesse at Rs1.45 trillion, which is about 0.7% of the country’s gross domestic product. This will undoubtedly help improve the investment cycle.

Economists say that apart from being a positive move, it is also a prudent one because it favours the investment cycle over the consumption cycle. Lately, there have been demands to boost consumption through cuts in goods and services tax rates.

“It is a prudent move to reduce the corporate tax rates because (1) it increases the retained earnings of the companies and forms the investible surplus for future, (2) moves India to parity with its regional peers thereby removing one of the issues related to manufacturing and exports, (3) maintains macro prudence by continuing to favour investment cycle rather than consumption cycle," said Suvodeep Rakshit, Senior Economist, Kotak Institutional Equities.

The Nifty Auto index vaulted 8.3% making it the highest gainer among sectoral indices. Auto stocks cheered as most listed auto companies will see a substantial reduction in tax outgo. “Most companies pay tax at an effective rate of 30% plus and hence the reduction in corporate tax rate will lead to an earnings upgrade of up to 10% straight away," says Mitul Shah, vice-president (research), Reliance Securities Ltd.

Of course, one man’s food is another man’s poison. The move has also raised concerns about the government’s fiscal position, with 10-year bond yields surging by 20 basis points. According to an economist, who did not wanted to be named, this move will have a huge impact on fiscal deficit. "Since the corporate tax budget estimate for FY20 was ₹7,66,000 crore, with this tax cut, revenue will come down to ₹6,21,000 crore, which is lower than last year. Now fiscal slippage is almost a certainty," said the economist.

But according to the head of research at a multinational brokerage, the government is also likely to curtail its expenditure to accommodate the tax cut. Overall, the hope is that with the corporate investment cycle picking up, the government’s coffers will begin to start filling sooner than later.

The way the markets have rallied shows that a great deal of money is also riding on this hope.

Interview - Players like Jio are coming and shaking up the whole space: Nestle CMD