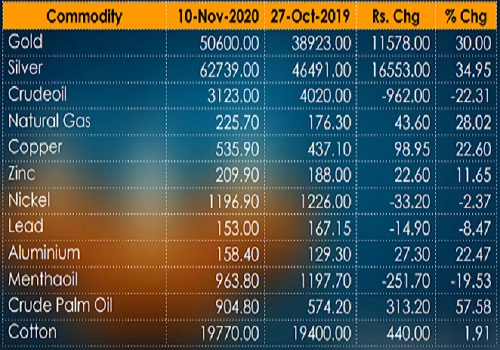 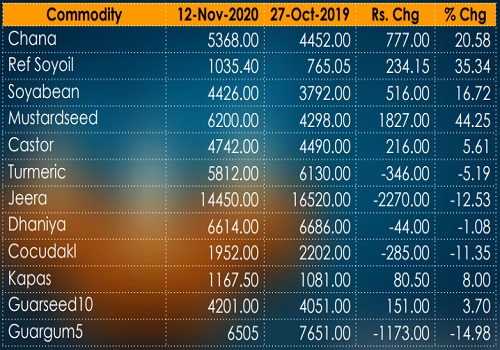 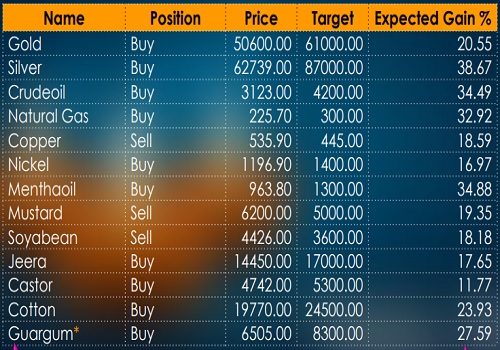 The confluence of tailwinds supporting the surge in gold prices this year is almost too long to list. Demand for the yellow metal prior to COVID-19 was already on a strong footing as a result of dampened bond yields and geopolitical uncertainty. These forces were amplified by the pandemic. Real interest rates dropped further, central banks unleashed significant asset purchase programs, and economic uncertainty spiked to unprecedented levels 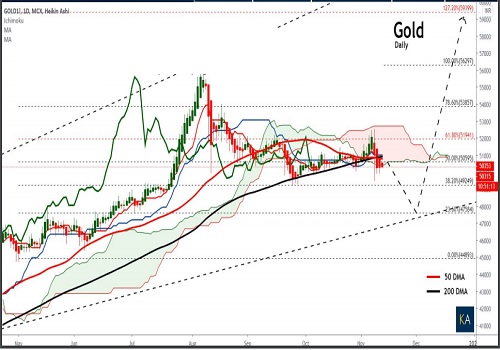 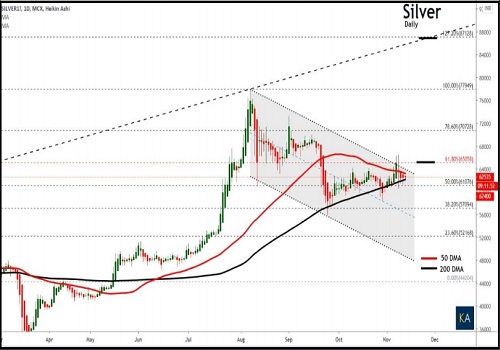 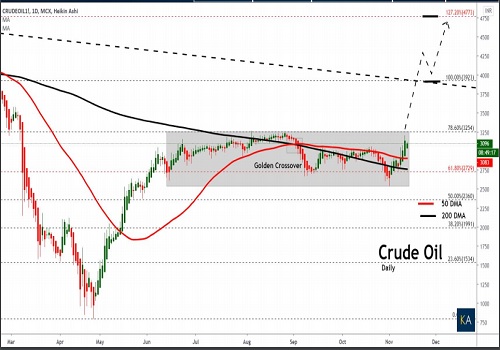 Natural gas markets were already facing an unfavourable backdrop prior to COVID-19 – largely due to a spike in U.S. production in 2019. COVID-19 has hit demand for natural gas end-uses, albeit significantly less than the hit seen in oil. Yet, prices tumbled to multi-decade lows over the summer, and volatility has surged. The market continues to be characterized by high inventories, which remain above their 5-year avg. Going forward, an expected recovery in U.S. LNG exports should help reduce bloated inventories. In a similar vein to oil, U.S. natural gas rig counts have tumbled, and the EIA is also anticipating a drop in natural gas production. Along with the upcoming heating season, these forces point to some easing on the supply side in the upcoming months. Consequently, the price environment should gradually improve. 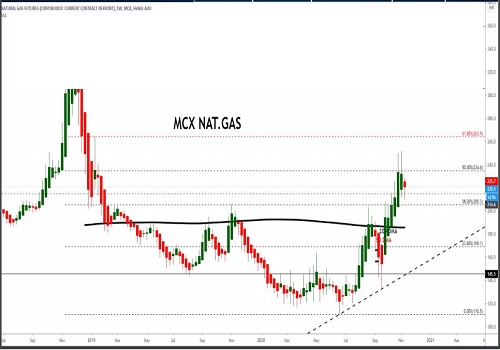 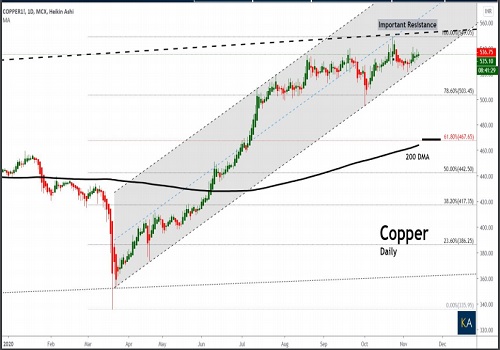 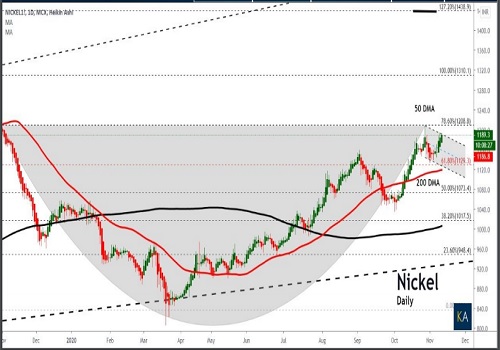 * Mentha Oil prices have seen 24 per cent decline this year, as demand for perfume has weakened in lockdown.

* Demand from the pharma, cosmetic and toiletries industry is expected to increase once again in the coming months.

* Mentha's industrial demand is expected to increase as winter rises.

* In the previous season, mentha oil production was very high.

* Due to this, the availability of mentha was very high and the prices could not rise much.

* About 75 percent of mentha oil produced in the country is exported.

* The demand for perfume has been weakened in lockdown, in which mentha is used. 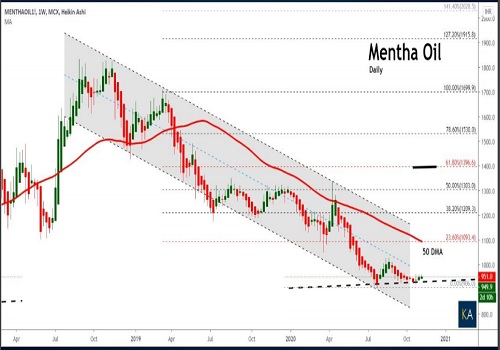 * Mustard seed prices gained by over 42% as support seen due to low crop estimates, festival and seasonal demand and increased prices by Nafed are strong factors.

* Prices also remained supported in recent sessions due to low harvest the stock will be very low for the next season and higher consumption has increased the buying spree among stockists.

* As per the report, the stock volume of mustard in India was 15.50 lakh tonnes.

* The government has set a target to achieve a record-high 7.5 mln ha area under the mustard crop in 2020-21 (Jul-Jun) rabi season.

* The government is adopting all possible measures to increase mustard area this year from around 6.9 mln ha in 2019-20. 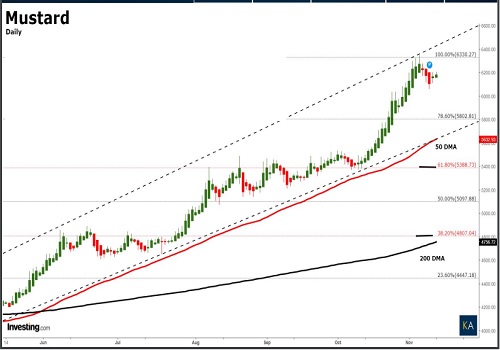 * Soyabean prices gained by over 13% as the soybean crop in India has suffered extensive damage in major Madhya Pradesh growing regions of Indore, Dewas, Malwa, and Ujjain which is likely to hamper the supply of crops.

* The threat of yellow moasis attacks in MP has continued to support prices.

* Brazil announced that it would suspend the import tariffs on corn, soybeans, soy meal, and soy oil from countries outside the Mercosur trade bloc which helped improve export demand. 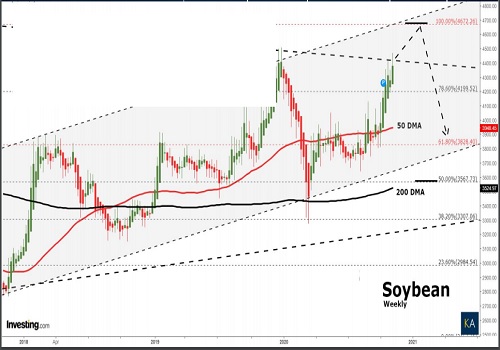 * A likely fall in the acreage in 2020-21 (Oct-Sep) rabi season as farmers may opt for other competitive crops due to better returns.

* Farmers in Gujarat and Rajasthan may opt for other rabi crops due to remunerative price.

* Sowing has started in the key growing districts and it is likely to gain pace after Diwali.

* Prices have gained in the past fortnight. The overseas orders are good and there is increased buying on the back of Diwali festivities.

* The Federation of Indian Spice Stakeholders (FISS) had released crop projections in February this year estimating about 5.35 lakh tonnes of crop for the year 2019-20, which was estimated to be higher by about 30 per cent as compared to previous year’s 4.16 lakh tonnes.

* Higher crop estimate for 2019-20, coupled with the Covid-19 led disruptions pushed down the jeera prices earlier this year.

* Boosted by large shipments of chilli, cumin and turmeric, India’s spices exports registered a 15 per cent growth in quantitative terms during April to August this year.

* Cumin followed with a shipment of 1,33,000 tonnes valued at ₹1,873.70 crore, registering 30 per cent and 19 per cent increase in quantitative and value terms respectively. 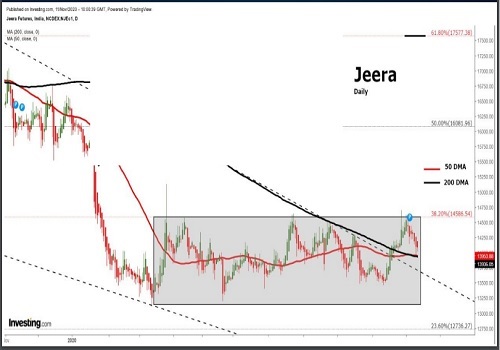 * NCDEX Castor Seed futures to trade bullish as the current year (2020-21) sowing acreage all India is estimated to be lower compared to the previous year by 18-20 percent, majorly in the states of Gujarat and Rajasthan.

* Moreover, poor rainfall in the north-west parts of India in the monsoon season has led to a decline in yields of the standing crops in the above states.

* The domestic demand for organic fertilizers is expected to increase as farmers have moved towards Rabi crop sowing till the end of the year.

* Domestic supplies continue to remain hand to mouth and may increase based on the demand requirements by traders and exporters.

* Global exports of castor seed oil and meals continue to remain strong, as China is already overstocking and rising demand from the European Union to stock for any future issue in the supply chain during second wave of COVID-19.

* But then, higher carry forwards stocks due to higher production in last year, could limit any major upside movement in prices. 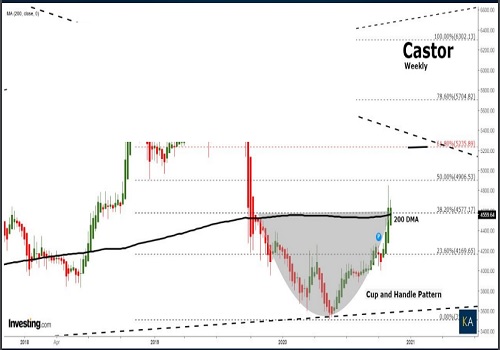 * Cotton Association of India has estimated a reduction in production of four lakh bales from the 360 lakh bales the country had reported the previous year.

* Cotton Association of India (CAI) has estimated that 60 lakh bales of cotton.

* China and Bangladesh are expected to be the biggest importers of Indian cotton for this season.

* CAI has estimated a reduction in production of four lakh bales from the 360 lakh bales the country had reported the previous year.

* A dip in production has been reported mostly from the state of Maharashtra, where October rains and pink bollworm attacks have led to the destruction of the crop.

* India’s cotton season has started with a huge carryover of 107.50 lakh bales as against the 32 lakh bales last season.

* Consumption is expected to go up in the background of increased demand in the textile sector post the Covid-induced lockdown.

* The majority of Indian cotton is expected to land in China and Bangladesh – traditionally the largest importer for Indian cotton.

* Meanwhile, the Cotton Corporation of India (CCI) has started its cotton procurement under MSP in various parts of the country. 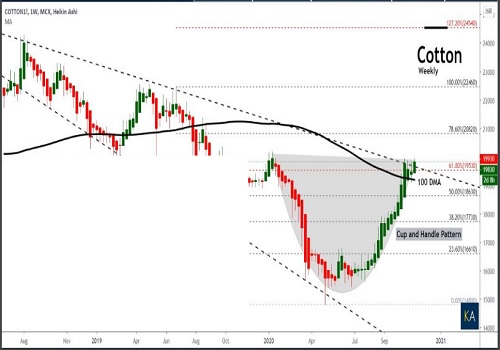 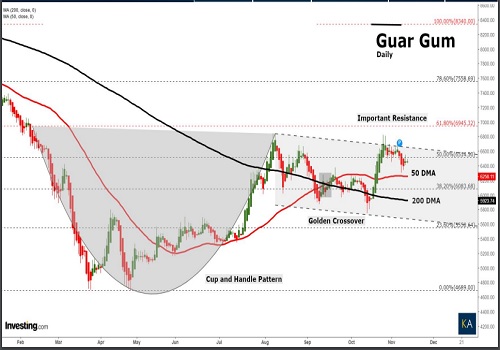 AirAsia announces free rescheduling of bookings till May 15