* The Japanese yen edged lower while offshore yuan climbed as the U.S. and China continued to engage in discussions to overcome their trade differences.

* The dollar held gains as a Chinese delegation’s decision to cancel plans to visit U.S. farms fueled concern on the progress of trade talks between the two governments. The Japanese yen and Swiss franc also climbed.

Led by the government’s big bang announcements, the Indian currency closed higher on Friday. The local unit on the last day of the previous trading week opened higher at 71.19 a dollar and moved in a range of 70.68 – 71.19 before settling the day at 70.94 against its previous close of 71.34. On week on week basis, Rupee closed lower by 2 paise.

The domestic markets posted its biggest single day move in a decade after Union government announced reduction of corporate tax rate to 22% and a 15% rate for new manufacturing companies. Oil prices for the last week jumped on the Saudi Arabia crisis. FIIs were buyers in the capital market segment; bought shares worth Rs 35.78cr on 20 Sep as per exchange’s provisional data. DIIs, on the other end were also buyers to the tune of Rs 3001.32cr for the same period. For the ongoing week, Sept F&O expiry will be a major trigger. 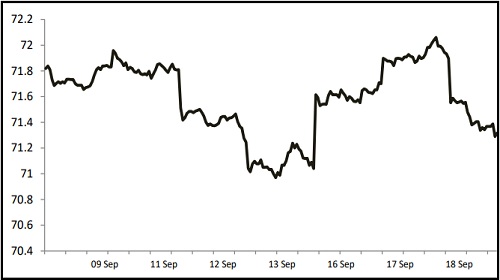