Investors  shouldn`t  get  too  excited about improving cement margins

For cement producers, a combination of price hikes and softening input costs should translate into better margins in the June quarter. But analysts suggest that investors shouldn’t get too excited since the improvement may not be sustainable.

“Stable costs should improve sector margins in FY20E; however, margin expansion is well factored in our and consensus expectations. Margins should peak in 1QFY20E and we would refrain from extrapolating it," analysts at Kotak Institutional Equities said in a report on 3 July. 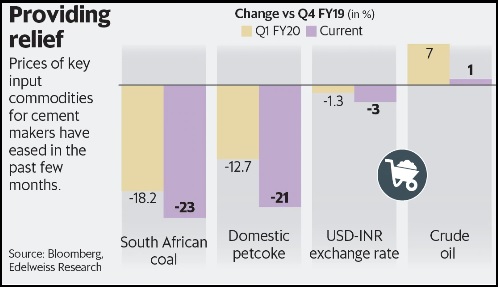 Still, the average cement price at an all-India level at ₹363 per bag is higher sequentially and annually. One cement bag weighs 50kg. This means although volume growth might disappoint, revenue growth would save the day in the June quarter. Second, operating costs continue to ease. According to Edelweiss Securities Ltd, prices of petroleum coke, imported as well as domestic, have corrected 10–15% over the past three months.

Cement companies would have some inventory of these commodities, which means the gains from the lower costs will come with a bit of a lag effect. Even so, Edelweiss analysts expect they will be sufficient to offset some of the recent moderation in cement prices.

For now, cement companies can seek solace in easing input costs. But analysts reiterate that key triggers for the sector’s earnings upgrade remain improvement in demand and prices. And the outlook there isn’t very encouraging.

According to government data, industry volumes increased by 1.8% year-on-year in April-May 2019. Demand in the June quarter was impacted by the general election and water shortage. Unfortunately, demand in the seasonally weak September quarter is likely to remain subdued due to the monsoon.

Improvement, if any, would be likely only in the second half of the fiscal year. And, it is hard to guess whether the quantum of demand increase would be able to match the ongoing capacity additions. So, analysts expect the sector’s utilization levels to remain below 70% and restrict sustainable improvement in margins.

As far as valuations go, there is hardly any room for error. “We maintain cautious stance on the cement sector on expensive valuations of large-cap cement names at 12-16 times FY2021E EV/EBITDA," added the Kotak report. EV stands for enterprise value and Ebitda is short for earnings before interest, tax, depreciation and amortization.

Tripura SEZ along Bangladesh to be multi-sector one