This Diwali to remain lite for D-Street - Mr.Jimeet Modi

Below is the Views On Weekly note by Jimeet Modi, Founder & CEO, SAMCO Securities & StockNote

This Diwali to remain lite for D-Street

Markets faced a mix week with investors flocking in and out of bourses over the Vidhan Sabha Elections. The Brexit deal was no peacemaker either as the ruling party couldn’t reach the intended conclusion which caused certain affected stocks to react negatively. Moreover, FPIs and DIIs have been marginally net sellers in the cash market this week. The week started on a gloomy note as the whistleblower letter on Infosys surprised the Street. The ADRs and stock reacted immediately with a knee jerk reaction. However, the entire outperformance of Infosys due to the result and the re-rating has now been nullified which has brought the valuation gap between TCS and Infosys to its last year’s average which leaves little room for a downside at the moment. The audit committee’s reaction will be a wait and watch for the stock.

But the week had one more negative surprise this time from Supreme Court, the old telcos faced a big blow when the Supreme Court backed the DOT view that telecoms have to pay revenue share on a larger pie to the Government. It won’t just be Vodafone and Airtel who will be the biggest losers in this battle but it can impact the banks too who have lent to these telcos. Such a stressful scenario with IUC charges, 5G spectrum auctions coming up, market share loss due to competition by Jio will definitely be a drag on this sector and might increase systematic risk to the market itself.

Event of the Week

The result season unfolded at a neutral pace with some companies such as Avanti Feeds, SBI, ITC, HDFC Life surpassing expectations with strong growth numbers while two-wheelers and passenger vehicles continued to underperform with slower volume growth. The ground level slowdown seems easing for now, but may take time to pick up pace, however, till that time investors will have to keep patience.

Nifty50 has entered a consolidation phase after facing resistance at 11720. Nifty has formed a small doji pattern in the weekly time frame indicating a pause in the unfolding uptrend. Market will gain momentum the moment Nifty crosses 11750 which will then take the market to 12000 swiftly. Buy on dips should be the strategy for the traders 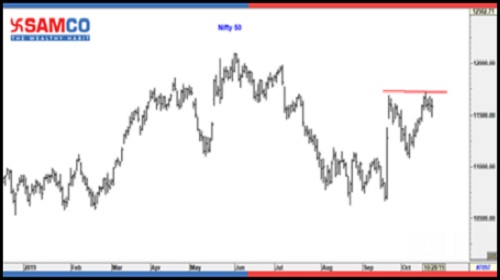 Expectations for the Week

The coming week, certain results can surprise bourses which will keep markets buoyant. The festive season will bring some cheer as consumers increase spending which will aid in ramping up sales. With Government’s efforts to improve sentiment and rate cut expectations by a further 0.25 bps, the financial results for the next quarter should show further improvement. Since there is a lot of uncertainty right now, investors should pick stocks with a basket approach. Metals and mining, pharmaceuticals, agriculture, infrastructure are some beaten down sectors which should be considered from a stock picking perspective. These “so called untouchables” are cheaper from a valuation perspective and hence are value buys at this point. Nifty closed the week at 11583, down by 0.66%. Happy Diwali and a prosperous New Year to everyone.

This Diwali to remain lite for D-Street - Mr.Jimeet Modi